Bus Éireann relying on CIÉ parent to stay in business 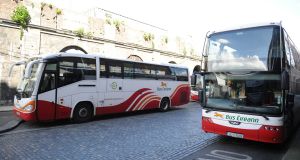 Bus Éireann’s board approved a plan in May that involved cutting 240 jobs and other steps designed to save €20 million a year and stabilise its finances. Photograph: Aidan Crawley

Figures for the nationwide bus operator, which is restructuring in a bid to save the business, confirm that it lost €9.5 million last year.

The accounts show that Bus Éireann’s parent, CIÉ, has written to the company confirming that, if needed, it will provide it with the cash to continue trading and to meet its liabilities for at least 12 months from the signing of the accounts.

CIÉ’s support allowed Bus Éireann’s board, chaired by Aidan Murphy, to state that the company was a “going concern”, that is, one that will stay in business for the foreseeable future.

However, Bus Éireann’s accounts quote a CIÉ statement showing the parent faces risks of its own, including managing costs, and may have to rely on Government support.

A letter from the Department of Transport, Tourism and Sport to CIÉ last June stated that it was Government policy that the group should at all times be able to meet its liabilities, but warned that the letter was not a guarantee.

A financial crisis that management said threatened Bus Éireann’s survival prevented the board from signing the accounts until the end of June, weeks after agreeing a rescue plan with workers.

Accumulated losses reached €22.4 million by December 31st, from €12.9 million a year earlier, while net assets more than halved to €6.8 million.

Its board approved a plan in May that involved cutting 240 jobs and other steps designed to save €20 million a year and stabilise its finances.

Management and workers only agreed the measures following a three-week strike in late March and early April.