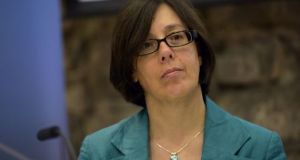 Anne Graham of the National Transport Authority. She has rejected a claim there is saturation in the inter-city bus market. Photograph: Dara Mac Dónaill

A final decision by Bus Éireann on whether to introduce unilaterally widespread cuts in staff pay as part of a radical survival plan is not now expected until later this week.

Earlier this week Bus Éireann said it would be insolvent by May if cuts aimed at generating savings of €12 million in payroll costs were not introduced.

Unions have warned of an all-out indefinite strike – it could spread to other parts of the State’s public transport sector – if the company reduced staff earnings without agreement.

A meeting of the full board of the State-owned company, which was expected to convene on Wednesday to consider its next steps after the collapse of talks with unions, was deferred. Informed sources said there were a lot of issues in play, and management was still looking at options.

It is understood one issue under consideration is the impact of any unilateral imposition of cuts to earnings on existing staff employment contracts. Last week lawyers acting on behalf of the the National Bus and Rail Union warned Bus Éireann of potential court action in the event of terms and conditions in existing contracts being breached.

Meanwhile on Wednesday, National Transport Authority chief executive Anne Graham said she would be extremely concerned at a strike in Bus Éireann and at the impact it could have on services which the company provides for it on a contract basis.

Ms Graham also told the Oireachtas Transport Committee that if Bus Éireann closed some of its existing services the authority would step in to ensure no local communities were “left behind”.

She said the NTA could not simply convert commercial services to ones considered to be public service obligation routes and apply a State subsidy. If the authority did step in, the services would have to be put out to tender.

The committee also heard the Government turned down proposals to provide increased funding this year to Bus Éireann and other CIÉ transport companies for operating the free travel scheme for the Department of Social Protection.

“The department ensured this submission was included in the budgetary considerations at that time. Given the many competing demands for funding in Budget 2017, the Government was unable to increase the level of funding for the free travel scheme.”

Mr Duggan said Minister for Transport Shane Ross had written to Minister for Social Protection Leo Varadkar seeking a review in funding arrangements for the free travel scheme which were last set in 2010.

Mr Duggan said this engagement was under way, but it would be up to the Government to decide on whether funding would be increased for the new proposal. He said up to 1.4 million people had potential eligibility for free travel under the scheme, which was first established in 1967.

He said in 2017 an estimated €61million would be paid to CIÉ under the scheme, and it was up to the CIÉ group on how this was apportioned between its constituent companies.

“The notion that there is saturation on the inter-city corridors served by Expressway services, and that the NTA grants licences to operators at the drop of a hat, also does not stand up to scrutiny. In fact since 2011 we have rejected almost as many applications for licences on these key routes as we have granted.”

She said the NTA’s primary responsibility in law was to the travelling public, “and when we assess an application for a commercial licence we do so with them in mind”.

“It has consistently been the case that where new licences are issued in these markets, that overall passenger numbers have increased, in many cases very significantly.

“In other words, rather than saturating the market what we have actually done is increase public transport capacity, and in so doing enabled many more journeys to be undertaken on the bus network.”

Speaking on RTÉ’s Today with Sean O’Rourke show, he asked why the Expressway bus from Waterford to Dublin was scheduled to leave at the same time as two private operators.

“The Bus Éireann bus has to make stops all along the way so it isn’t fair competition and that needs to be addressed...That’s not fair and it’s not good enough.

1 Who are Ireland’s 17 billionaires?
2 Are there annual limits on inheritances or gifts to a child?
3 Fianna Fáil may have just pressed the pause button on the property market
4 UK to prioritise EU trade deal over one with United States
5 Eason puts Blanchardstown store on market at €16m
6 O’Flynn ‘very unhappy’ with extra payments to former employee, court hears
7 My father in a nursing home wants to gift me his house
8 IDA chief says State could soon ‘be fighting for a smaller pool’ of foreign investment
9 Dunnes premature in challenging Point Village resolution move, Supreme Court finds
10 Seamus Coffey decides against second term as chair of fiscal council
Real news has value SUBSCRIBE