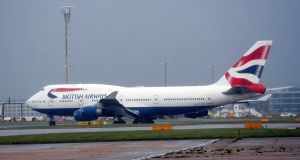 British Airways said it had alerted customers as soon as it became aware of the cyber attack. Photograph: Steve Parsons/PA Wire

Britain’s data protection watchdog said on Friday it has fined British Airways £20 million (€22 million) - its biggest such penalty to date - for failing to protect data that left more than 400,000 of its customers’ details the subject of a 2018 cyber attack.

The Information Commissioner’s Office (ICO) said its investigators found BA should have identified weaknesses in its security and resolved them with measures available at the time, which would have prevented the data breach.

“Their failure to act was unacceptable and affected hundreds of thousands of people, which may have caused some anxiety and distress as a result,” the ICO said.

BA said in a statement that it had alerted customers as soon as it became aware of the attack.

The penalty was considerably less than the £183.4 million the ICO proposed last year - in part reflecting the crisis the airline industry is now facing due to Covid-19.

Still, shares in BA’s Anglo-Spanish parent IAG slid to session lows following the announcement. By 9.17am GMT, they were 3 per cent lower at 93.2 pence.

Announcing the penalty, the regulator said its investigators found that BA did not detect the attack on June 22nd, 2018 - but was alerted by a third party more than two months later, on September 5th.

The ICO added that it was not clear whether or when the company would have identified the attack itself.

“This was considered to be a severe failing because of the number of people affected and because any potential financial harm could have been more significant,” it said.

Explaining why the final penalty was substantially lower than first suggested, the regulator said it considered representations from BA and the economic impact of the coronavirus pandemic, which has upended the travel industry.

“We are pleased the ICO recognises that we have made considerable improvements to?the security of our systems since the attack and that we fully co-operated with its investigation,” BA said in a statement.

Other major cyber incidents in the recent past include another London-listed airline, easyJet, which earlier this year said hackers had accessed the email and travel details of around 9 million customers.

US hotel operator Marriott International in March suffered its second data incident in less than two years, with information of about 5.2 million its hotel guests suffering a breach. - Reuters