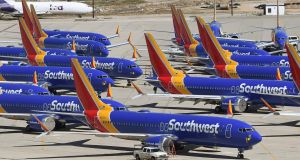 Boeing has identified a new software flaw in the grounded 737 Max which will require additional work on the aircraft, possibly further delaying its return to service.

The company has alerted the US Federal Aviation Administration and is notifying customers and its suppliers about the issue, it said in an emailed statement. Boeing’s best-selling jet was grounded on March 13th last year after two fatal crashes involving a flight-control system.

Ryanair has up to 210 of the craft on order but none in service, with chief marketing officer Kenny Jacobs indicating earlier this week that it could receive its first deliveries by April.

The issue involves how a software system on the aircraft checks to ensure that data it is receiving from other monitors is functioning properly, said a person familiar with the issue who wasn’t authorised to speak about it. The issue occurs when the system is initially powered up, the person said.

“We are making necessary updates and working with the FAA on submission of this change, and keeping our customers and suppliers informed,” Boeing said in its statement. “Our highest priority is ensuring the 737 MAX is safe and meets all regulatory requirements before it returns to service.”

The FAA didn’t comment on the latest issue to arise on the problem-plagued aircraft. “We won’t approve the plane for return to service until it’s ready,” the agency said in an emailed statement.

The 737 Max is costing the planemaker billions in losses. The software problem was discovered during the final validation review process of the software updates being installed on the aircraft, the person said.

It’s unclear how complex the repair will be. Software systems on aircraft require a far higher degree of reliability and checks before approval compared with consumer products. – Bloomberg/Reuters