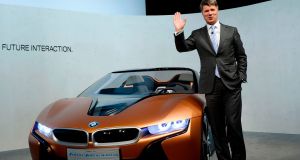 BMW’s chief executive Harald Krüger has quit days before a board meeting that was due to decide his future, putting the carmaker under pressure to find a successor to deal with falling profits and catch up with rivals in the race to develop electric vehicles.

The company’s supervisory board was due to discuss renewing Mr Krüger’s contract at a meeting on July 18. After he informed the board he would not seek a second term, it would now discuss his successor, the company said on Friday. Mr Krüger will remain in post until a replacement is named.

Klaus Fröhlich, head of research and development, and Oliver Zipse, head of production, are both earmarked as the strongest internal candidates to replace Mr Krüger, who has held his post since 2015.

His replacement will need to arrest the company’s falling profits and deal with the global trade war while also catching up with rivals that have surged ahead in areas of new vehicle technology.

While he has overseen growth in the company’s US and Chinese operations, huge model rollouts and record sales, Mr Krüger has come under pressure for slowing the company’s early progress in electric cars.

Last month, BMW tried to counter sceptics by pushing forward its electrification plans, accelerating a rollout of 25 electric or hybrid cars to 2023 from 2025, and adding more battery models to its line-up.

“BMW is well prepared for the future,” Mr Krüger told investors, analysts and journalists at an electric product demonstration in Munich last month.

BMW shares, which have lost about 35 per cent of their value during his tenure, barely moved on the news.

Arndt Ellinghorst, lead auto analyst at Evercore ISI, said: “We believe it shows a lot of character and respect for his team and the company that Harald Krüger is taking this decision ahead of a supervisory board meeting.

“BMW has potentially the strongest bench of talent and the most balanced hierarchy to deal with such a change of leadership.”

Much of the company’s strategy hinges on its production system, which can make electric or hybrid vehicles alongside traditional petrol and diesel ones, something that may favour production head Mr Zipse in securing the top role.

Under Mr Krüger’s watch, the carmaker has also entered into a number of partnerships to try and make up for its limited scale, working with Intel and Mobileye on driverless cars, Mercedes owner Daimler on new services, and Jaguar Land Rover on electric technology.

Norbert Reithofer, previous chief executive and current chairman of the supervisory board, said: “Over the last quarter century, Harald Krüger has demonstrated unwavering dedication to the BMW Group in all of the various positions he has held. I would like to express my sincere gratitude for his great personal commitment. I have complete respect and understanding for his decision and for his further plans.” – Copyright The Financial Times Limited 2019