ASL Aviation Holdings chief to retire after 22 years in post 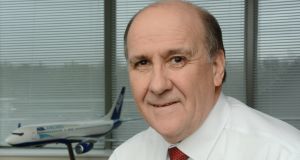 Hugh Flynn is to retire after almost 35 years in commercial aviation with the last 22 years as group chief executive at ASL Aviation Holdings. Photograph: David O’Shea

Swords, Co Dublin-based ASL has four airlines in Europe and two associated carriers Asia and Africa that fly passengers and cargo, which the group handles for international businesses such as FedEx and DHL.

ASL said Mr Flynn would retire as chief executive on July 13th after 22 years in the company’s top job.

Dave Andrew, ASL’s chief executive of its African and Asian interests and its leasing arm, will succeed him.

Mr Flynn will continue to serve as a non-executive director of ASL after his retirement.

“He will also become non-executive chairman of each of ASL’s subsidiary airlines in Ireland, Belgium, France and Hungary, ” a statement added.

Company chairman Charles Graham said Mr Flynn had “provided superb leadership in over 35 years in group companies and 22 years as chief executive of ASL”. He welcomed Mr Andrew to the chief executive’s job.

Mr Flynn, a commercial pilot, said he intended to “enjoy a bit of flying and spend more time with friends and family”.

During the global coronavirus pandemic ASL’s three Boeing 747s have so far transported more than 1.5 billion pieces of personal protection equipment between China, Europe and the United States.

European investor Star Capital last year bought ASL in a deal reported to be worth €200 million.

1 My aunt never told us that Gran passed away with no will
2 Ryanair to slash 1,000 flights from August and September schedules
3 Green Party TD queries ‘usefulness’ of another appeal in €13bn Apple tax case
4 The $6bn judgment pitting Nigeria against Irish businessmen
5 Government to push through €2bn credit guarantee scheme next week
6 If it’s safe to do so, could this be the time to spend for Ireland?
7 Costs and borrowing rules locking a generation out of home ownership, builder warns
8 McKinsey warned Wirecard a year ago to take ‘immediate action’ on controls
9 Majority of employees don’t want to return to pre-Covid working patterns
10 Covid anxiety among domestic holidaymakers could sink this summer
Real news has value SUBSCRIBE