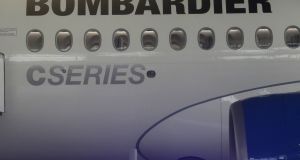 Bombardier on Thursday warned it is “vital” that it reduces its costs in the North to “protect jobs in the long term” after an overwhelming number of its Belfast workforce voted to reject a new cost-cutting wage package.

The Canadian aerospace group has set a target of cutting costs by 20 per cent at its Belfast facility by by 2017.

It had a tabled an offer to its 5,500 strong workforce in the North which outlined proposals Bombardier said could deliver cost reductions and ensure its competitiveness.

The deal included a new three-year wage agreement, reduced shift premiums, a one-hour extension to the current 36-hour working week and a reduction in overtime.

But trade union leaders on Thursday said the majority of workers have voted to reject the offer.

In a ballot organised by the Unite trade union, 88 per cent of workers voted against Bombardier’s cost cutting offer.

Davy Thompson, Unite regional co-ordinating officer, described the pay offer as inadequate and said it would have left the Belfast workforce “dependent on a performance-related bonus for an improvement in their incomes”.

“While we recognise that Bombardier faces exceptional cashflow pressures, the membership of Unite has exercised their democratic right in relation to this offer.

“We will now seek to engage with management in order to progress this matter further,” Mr Thompson added.

Bombardier has said that it “very much regrets” that its offer was not accepted by the workforce.

A spokeswoman for the aerospace group added: “It is vital that we reduce our costs significantly if we are to sustain our business here and ultimately protect jobs in the long term. The company remains open to engaging with the trade unions in order to find a resolution. We will continue to look at measures to reduce our costs and improve our competitiveness.”

In October the Canadian group was forced to ask the Quebec government for financial help totalling $1 billion (€0.9bn).

This is a worrying time for the North’s manufacturing sector in general which has suffered a landslide of hundreds of job losses recently.

Just last month the French tyre group, Michelin announced plans to close its factory in Ballymena by 2018 with the loss of 860 jobs. It has said that its other European plants were more competitive than its Ballymena factory.

The industry group, Manufacturing NI, has said the North urgently needs a new manufacturing strategy if local businesses are to survive specific Northern Ireland-challenges such as high energy prices.