Airbus hopes to deliver first A350 this year 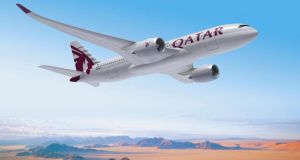 A computer rendering of the A350 in Qatar Airways livery. The A350 is the manufacturer’s challenger to Boeing’s 787 long-range, mid-sized aircraft. Photograph: AP Photo

The chief executive of Airbus, Fabrice Brégier, is hoping that 2014 will be remembered for Airbus delivering the A350 passenger jet – the company’s first new type of aircraft in seven years – to its initial customer, Qatar Airways, by the end of the year.

Mr Brégier can claim to be the father of the A350 after supervising its progress for eight years. If it is supplied to Qatar Airways in the fourth quarter it will break with the recent record of aircraft being delivered very late.

However, there have been signs that the boom in aircraft orders of recent years may be coming to an end or at least starting to slow. Evidence is mounting that airlines, on the back of economic recovery, are expanding their fleets too fast, resulting in falling ticket prices and declining profits.

This in turn suggests that Airbus and Boeing, the two giants of airliner manufacturing, plan to make too many aircraft over the next few years, and could become embroiled in price wars.

The biggest threat to a stable duopoly between Airbus and Boeing could lie in the increasingly competitive long-range jet market, where the European manufacturer is expected to launch a new version of its popular A330 jet. – (Copyright The Financial Times Limited 2014)