Website says it has seen 70% spike in searches from US 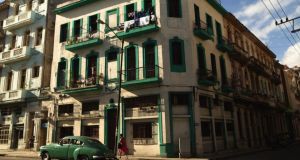 Travel experts say Cuba’s state-run hotel sector lacks the capacity to handle a major increase in US visitors, without the variety of high-end hotels found in other destinations

Online home-rental marketplace Airbnb now offers properties in Cuba, as it looks to capitalise on an expected travel boom resulting from the normalising of relations between the United States and the Communist-run nation.

President Barack Obama has loosened some Cold War-era travel restrictions, allowing Americans to visit the Caribbean island for a range of reasons, such as family visits or education.

US awmakers have proposed further easing to permit purely tourist travel. But pure beach and resort tourism remains illegal for Americans in Cuba under a five-decades-old trade embargo.

Airbnb said that after Mr Obama announced the changes, it saw a 70 per cent spike in US searches for rentals in Cuba. In response, it has added more than 1,000 listings on the island.

Americans booking stays in Cuba on the site will have to assert that they have a license from the US government to travel there.

Airbnb’s Cuba services are only open to US travellers, but could expand to include people from other countries, the company said.

“They made us this proposal a few days ago and we’re delighted to accept what they offered us,” said Reinier Torres, who manages a Havana home on Airbnb’s service. “It’s a great opportunity for us to attract American tourism ... though we haven’t seen any practical results yet.”

US travel companies licensed to offer educational and cultural tours to Cuba are reporting a surge in interest from Americans, with bookings for this year up steeply.

Airline charter companies flying to Cuba from two Florida cities, Miami and Tampa, are also reporting increased business. In the first three months of 2015, they reported about 175,000 passengers.

Travel experts say Cuba’s state-run hotel sector lacks the capacity to handle a major increase in US visitors, without the variety of high-end hotels found in other destinations.

The private bed and breakfast option is increasingly poised to pick up the slack in the state sector and could spur investment in new hotel construction said Emilio Morales, president of the Havana Consulting Group in Miami.

Other US businesses have begun offering services in Cuba. Kayak, owned by online travel agency Priceline Group, has added Cuba to its website. And several airlines have said they are looking into adding flights.