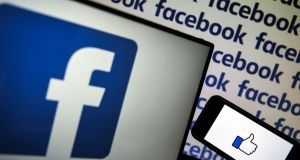 Facebook employees have been told they can work from home if it is possible to do so until the end of the year. Photograph: Loic Venance/AFP via Getty Images

We all know by now that remote working is the new normal, and that it could have repercussions for us all.

Some will be good – a better work-life balance, new career opportunities opening up, being able to live in a community of your choice instead of one dictated by proximity to the workplace. But there are downsides, such as a potential end to the dreams of Silicon Valley or capital city-level salaries for workers based in more affordable locations.

Although we were all forced into a situation that saw us share “office” space with our living space and encounter all the chaos that entails, it may be difficult to envisage a return to the traditional office when life resumes some semblance of normality.

Some companies don’t want to. Twitter, for example, has told employees that they can work from home “forever” if they want. Shopify announced earlier this week that the ecommerce company would be “digital by default”, and its employees would largely work from home. “Office centricity is over,” Shopify chief executive Tobi Lutke wrote on Twitter.

The catch, if you can call it that, is that salaries will be adjusted to reflect the cost of living in those areas. So workers won’t be able to take their Silicon Valley pay packets to rural areas where living is significantly cheaper. Facebook will be using VPNs to check-in on employees to enforce that.

The situation may be also giving property investors some pause for thought. Tech companies have been hoovering up office space as their businesses expand. Silicon Valley stalwarts Facebook and Google employ thousands at their Silicon Valley locations; in Dublin Facebook is developing a campus at AIB’s former bank centre in the leafy heart of Dublin 4. In this brave new world, where people can choose to work from home, how many campus developments like this will we see in the future?

And it’s not just about commercial property. Although Facebook’s plans only apply to its US staff, if it does decide in the future to implement the policy at its international offices, there could be repercussions for the residential property and rental markets elsewhere. Without the offices to draw people to a particular area, will we soon see a normalisation of the rental markets?