Virgin Media takes on extra staff due to unprecedented demand 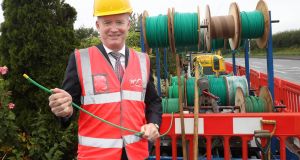 Virgin Media Ireland has taken on 80 additional staff over the past week as it seeks to deal with unprecedented demand for its services.

The company said it had witnessed a 300 per cent rise in requests for services from customers since the Covid-19 crisis began in Ireland. It said it was looking to ensure it had enough bandwidth to support subscribers and was prioritising calls for assistance from the healthcare sector and others engaged in managing the State’s response to the crisis.

“Any of the front-line services that contact us are getting an immediate response,” said the company’s director of business, Aidan D’Arcy.

He said this included facilitating a request to build a superfast wifi network for a new overflow hospital in Dublin, which the company expected to complete in just three to four days, in contrast to the usual four to six week turnaround.

In addition, he said it had recently doubled bandwidth at Mercy University Hospital in Cork to deal with Covid-19 testing requests and results.

“The needs of hospitals and other healthcare settings have obviously changed dramatically over the last month and so we’ve been putting extra capacity in so they can better co-ordinate logistics around testing,” said Mr D’Arcy. “So we’ve given them increased connectivity so they can use digital tools such as the Healthlink messaging service more effectively.”

He said that in addition to working with the health service, the company was liaising with other agencies involved in managing the Covid-19 crisis.

“We’re bracing ourselves for more requests, not just from the health service but also from the Army, which is working quietly in the background preparing themselves to be a release valve for when the pandemic peaks,” he said.

Virgin, which derives most of its income from supplying cable broadband, pay TV, telephone and mobile services, has about 993,700 subscribers locally, according to recently published figures.

Mr D’Arcy said that with so many people working from home and with schools closed, Virgin’s broadband infrastructure was being tested in a way that had never been foreseen.

Virgin’s own 300-strong customer support team in Limerick is also working remotely, and the company recently took on an extra 80 people to help respond to requests from the public.

“A lot of our customer base has had to adapt to remote working so we’ve been doing a lot of upgrades for them to facilitate it,” Mr D’Arcy said.

“We’ve been redeploying staff working in retail to help with customer care and have also taken on extra people to help maintain a high level of service,” he said.

1 Huawei asks Samsung and SK Hynix for chip supplies in face of US isolation
2 Pricewatch: Coronavirus has given us four categories of shopper
3 Denis O’Brien forced to lift hood on Digicel in debt restructuring
4 Aston Martin chief to leave as part of shake-up
5 Chicken farmer sues Revenue over failed family business
Real news has value SUBSCRIBE