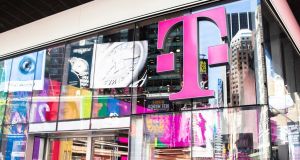 The recut deal will give German telecoms company Deutsche Telekom, the parent of T-Mobile US, 43 per cent ownership of the yet-to-be combined US wireless carrier. Photograph: Brittainy Newman/New York Times

T-Mobile has renegotiated the takeover terms of its more than $70 billion (€64.5 billion) purchase of smaller rival Sprint, paving the way for the consolidation of the third- and fourth-largest players in US telecommunications after a hard-fought legal battle.

The recut deal will give German telecoms company Deutsche Telekom, the parent of T-Mobile US, 43 per cent ownership of the yet-to-be combined US wireless carrier. Deutsche Telekom had earlier agreed to an all-stock transaction that would have given it roughly 42 per cent of the combined business, which will retain the T-Mobile name.

Deutsche Telekom had pressed to renegotiate the deal as the performance and share prices of the SoftBank-owned Sprint and T-Mobile diverged significantly since the two companies agreed to the takeover in 2018.

SoftBank will own 24 per cent of the merged business, down from the 27 per cent it had earlier accepted. The Japanese telecoms group has agreed to surrender 48.8 million shares it was set to acquire in the deal back to the newly-formed company as part of the negotiations. Those shares will be reissued to SoftBank if T-Mobile’s stock price climbs to $150 before the end of 2025. It closed at $99.50 on Thursday.

While the revised terms will reduce SoftBank’s ownership stake in T-Mobile, it clears the way for the indebted group to more quickly complete the deal and offload tens of billions of dollars’ worth of Sprint debt it has had to carry on its own balance sheet.

The new package maintains the terms of the original deal for non-SoftBank Sprint stockholders, who will receive a share of T-Mobile for every 9.75 shares of Sprint they hold.

Had the deal been revised for all Sprint shareholders, it could have required fresh shareholder votes at the two wireless carriers, which likely would have taken several months to complete, one person briefed on the deal said.

“SoftBank has confidence in the proven execution capabilities of the combined Sprint and T-Mobile teams to build one of the world’s most advanced, nationwide 5G networks and execute the new company’s business plan,” said Marcelo Claure, a SoftBank board member. “These and other factors give [SoftBank Group] full confidence that it will recover all of the surrendered shares.”

When the all-stock deal was first struck in 2018, it valued Sprint shares at roughly $6.62 each, but the company’s business has deteriorated in the years since.

In 2019, legal advisers for Sprint warned US regulators that without a deal it would have limited options. By contrast, T-Mobile shares have outpaced the broader market over the same time.

News of the revised deal saw Sprint shares climb 4 per cent to $0.90 in after-hours trading on Thursday.

The deal was approved last week by Judge Victor Marrero, who oversaw a challenge brought by a group of Democratic-led states that had argued it was anti-competitive.