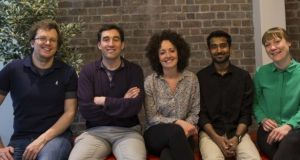 ChangeX, the Irish-headquartered social entrepreneurship platform which is backed by a number of high-profile investors, has raised €550,000 out of a targeted €850,000 in an ongoing funding round. The news comes as the organisation announces a new “impact as a service” model to track philanthropic investments in real-time.

The not-for-profit, which is based in Dogpatch Labs in Dublin, is behind a platform that aims to enable communities to replicate popular local projects across the country.

Among the projects that investors can currently back via the Change X platform are CoderDojo, Irish Men’s Sheds, Failte Isteach and GIY (Grow It Yourself).

ChangeX chief executive Paul O’Hara told The Irish Times the organisation had raised an additional €550,000 in an ongoing funding round with investment coming primarily from returnee backers.

“We need to get another few investors onboard to get us over the line to €850,000 but we’re hopeful we’ll be able to have done this in a few months,” said Mr O’Hara.

The organisation’s new impact as a service model is intended to create more transparency for those funding investment projects.

“ChangeX was initially set up to help ideas that are working well in one place – such as GIY in Waterford – to easily spread to other communities. One of the biggest barriers, though, is finance so we wanted to create something compelling for investors that would allow them to easily finance the scaling of ideas. The main value of the impact as a service model is that there is a lot of key information missing from the market generally in terms of pricing and the effect of investments. The new model helps bring accountability to investments made,” said Mr O’Hara.

The new service is launching with more than €300,000 invested from philanthropic investors in both Ireland and the US, including Bebo founders Xochi and Michael Birch and MyFitnessPal chief executive Mike Lee.

ChangeX, which launched in 2015 in Ireland, currently employs eight people. It recently expanded to the US, basing itself in the state of Minnesota with a view to branching out further stateside.

1 In this strangest of recessions, what happens next for Ireland?
2 Bank of Ireland sees about 2,000 staff apply for voluntary redundancy
3 Michael O’Leary is the boss you want to lead an airline out of crisis
4 Fortnite owner signs multimillion deal to buy Irish ‘kidtech’ firm
5 Should I switch bank now with Ulster Bank at risk of closing?
Real news has value SUBSCRIBE