Double standards when it comes to lives of female executives 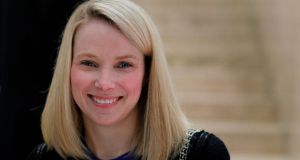 Marissa Mayer: Yahoo chief executive has already proved that a woman can have a baby and run a company. Photograph: Bloomberg

I am growing increasingly alarmed by the incontrovertible evidence that critical information, likely to be relevant to the job performance of the world’s top technology company executives, is going unreported.

My unease about this worrying situation rose yet again this week. Clearly, we have a too often discreetly hidden governance issue that raises important questions about how people will effectively run companies – companies that are major employers, have armies of expectant shareholders, and a significant place in the global economy.

I speak of none other than the – let’s be honest, shocking – fact that the public, as well as shareholders and investors, are routinely left without any knowledge of the impending fatherhood of the men running these tech goliaths.

Surely we are now well past the time when such information should be a matter for obligatory disclosure, to be considered along the lines of an executive’s potential conflicts of interest, company shareholdings, or a serious illness? I was thus immensely relieved this week to see that, finally, some brave publications stepped forward to pioneer change on a subject that, once revealed, must create a drive for more openness in the corporate world.

Is this appropriate, much less fair, in a corporate environment? Especially, in the C-suite of top line executives, where greater personal responsibility is, rightly, expected?

Wall Street will no doubt be ready to demand needed transparency in this area, even if some still argue that this is more the arena of one’s private life. Well, I think we can all agree that companies cannot allow their executives in cavalier fashion to lose focus on the bottom line simply to focus instead on baby’s bottoms and bottles.

But, as I say, I am happy some publications have now gone against the somnambulant incompetence of financial journalists elsewhere and headlined an example of such activity. I will let the headlines speak for themselves.

Oh, wait. Those are the same old thing we read year in and year out about women and babies. But because the woman this time runs a big company, the status of her womb seems to have qualified as a headline piece of information. Well, I get that. We – every one of us – have the right to be concerned about whether an executive can become a parent and still do their job.

Yes, I know Mayer has done this all before. Shortly after she took the top job at Yahoo in 2012, she announced she was pregnant. Yes, I know she had the baby and kept working and the company didn’t collapse. Some even have said the sudden drive to improve the benefits and options for women working at technology companies generally might have begun because of that high profile CEO pregnancy.

1 Who are Ireland’s 17 billionaires?
2 Are there annual limits on inheritances or gifts to a child?
3 Fallon & Byrne gets permission for extension in Exchequer Street
4 My father in a nursing home wants to gift me his house
5 Fianna Fáil may have just pressed the pause button on the property market
Real news has value SUBSCRIBE