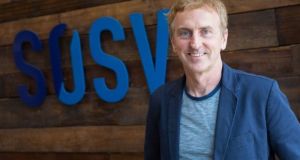 Sean O’Sullivan, tech veteran and founder of SOSV which he created in 1995.

The venture capital firm SOSV, which was originally founded in Cork as a personal investment fund for tech veteran and former Dragons’ Den star Sean O’Sullivan, has raised its largest fund to date.

It will be used to invest in about 150 new start-ups a year through SOSV’s various accelerator programmes, which cover areas such as hardware, software biology, food, robotics, medical devices, transportation and green energy. Most of the money raised for the new fund will however be deployed in later rounds for its best performers.

“On top of the $65 million SOSV invests directly into our start-ups every year, SOSV’s deep-tech startups are getting huge funding leverage from our syndicate of VCs, angels and corporates,” he added.

SOSV manages over $700 million (€629.6 million) with a portfolio of over 900 start-ups. Mr O’Sullivan created the VC in 1995 after the IPO of MapInfo, a company he co-founded that pioneered street mapping on computers.

Mr O’Sullivan, who is credited with co-creating the term “cloud computing”, and was an early backer of companies such as Netflix, got his entrepreneurial start in 1985 with MapInfo, which went on to become a $200 million (€179.9 million) public company with over 1,000 employees worldwide. It was eventually sold for $408 million (€367 million) in 2007.

The company has been ranked as one of the largest and most prolific accelerator investors in the world. It employs more than 100 staff across nine locations globally with a small number based in Cork.

SOSV last year relocated its RebelBio life sciences accelerator programme to London from Cork due to a lack of incentives for investors and a lack of support from partners beyond Enterprise Ireland.

Prior to its decision to relocate the accelerator, SOSV had cancelled a planned second annual instalment of the programme and withdrew plans to establish a European version of Food-X, for the same reasons.

The RebelBio programme introduced the world to a number of innovative start-ups that have made news headlines across the globe. These include Perfect Day, a company developing a product that uses bioengineered yeast to produce real milk protein. The former Cork-based start-up has raised over $200 million (€1.8 million) to date.

Among the other companies in the SOSV portfolio are Memphis Meats, a San Francisco-based start-up developing meat grown from animal cells, and Harmonix, a leading independent game development studios, with products such as Guitar Hero.

SOSV was also the lead seed investor in Jump Bikes, which was recently acquired by Uber.