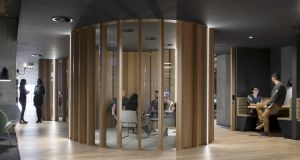 Slack earlier this year signed a lease for new offices that will give it capacity to add as many as 1,100 jobs locally

Losses ballooned at the Irish arm of Slack Technologies last year as turnover jumped by more than 60 per cent to $216.7 million (€182.5 million).

The Dublin-based subsidiary, which is charged with selling the company’s software outside North America, recorded a $271 million pretax loss for the 12 months ending January 31st. This compared with an $82.5 million loss a year earlier.

The company, which selected Dublin for its European headquarters in 2015, attributed the loss to continued investment in its product and an expansion of its sales function.

Slack is a popular messaging and search platform that brings team communication into one place. The company has more than 12 million daily active users and more than 130,000 paid customers. These include Oracle, Panasonic, SAP, the New York Times, the BBC and Starbucks.

Slack opted for a direct public listing last year. Its shares are trading at about $26, down from over $34 earlier this month.

According to recently filed accounts for its Irish subsidiary, Slack experienced a significant increase in demand and usage of its technology in the early days of the coronavirus pandemic, although the rate of new customer acquisition has since settled down to near normal levels.

The company initially announced plans to hire 100 people in Dublin when it established its European HQ in the capita. The latest accounts show it employed 126 people at the end of January 2020, up from 95 in the prior year.

Staff costs, including wages and salaries, totalled $21 million, as against $15.4 million in 2019. Directors’ remuneration totalled $1.1 million.

The latest accounts show the company is committed to a long-term lease amounting to $100 million for Fitzwilliam 28.

The Irish Times revealed in January that Slack’s decision to rent all 135,617sq ft of the Fitzwilliam Street property will give it the capacity to add as many as 1,100 jobs in Dublin.

1 Chris Johns: Boohoo exposed on pay and conditions in digital economy
2 In this strangest of recessions, what happens next for Ireland?
3 Should I switch bank now with Ulster Bank at risk of closing?
4 Ireland’s Covid-19 economy in five graphs
5 Air travel never going ‘back to way it was’
Real news has value SUBSCRIBE