Company earned $1.2bn from selling virtual currency to users as it heads for IPO 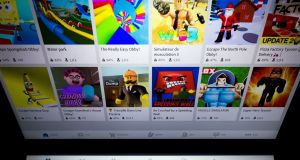 Roblox, the video game platform loved by preteens, earned close to $1.2 billion (€1 billion) from selling virtual currency to its users in the first nine months of the year as gaming surged under Covid-19 lockdowns.

The figure was included in a share prospectus for the company published on Thursday evening, where the company laid out its case for investors ahead of an initial public offering.

What the company labels “bookings” - sales activity that is not yet fully recorded as revenue - was almost entirely composed of virtual currency purchases. The $1.2 billion figure represented a 171 per cent increase from the same period in 2019.

Roblox recognises revenue from sales of the digital currencies, known as Robux, over the average lifetime of a playing user, which it currently estimates at 23 months.

Enforced time indoors has lifted the entire gaming sector, but Roblox has enjoyed conspicuous success. It has also drawn concern from parent groups about its potentially addictive nature and offensive content on the platform.

Roblox listed its ability to “provide a safe online environment for children” as a risk factor in the prospectus.

In the first nine months this year, the company boasted 31. 1 million daily active users spending 22.2 billion hours on its platform. This year it overtook Minecraft, the video game acquired by Microsoft in 2014, in active monthly users.

Roblox said it had increased spending on infrastructure, trust and safety and research and development, and was paying more app store fees because more of its players were on mobile phones.

Roblox said it would raise as much as $1 billion in its public offering, with Goldman Sachs, Morgan Stanley and JPMorgan acting as lead underwriters.

Its valuation at IPO was not clear, but the start-up was most recently valued at $4 billion when it raised $150 million in a funding round led by venture capital group Andreessen Horowitz in February.

Roblox’s success has been rooted in its model as the “YouTube of the gaming world”, said Matthew Warneford, a founder of children’s digital consultancy Dubit. Rather than creating games, Roblox offers developers tools to build their own game worlds.

“That allows for innovation in a way that can’t exist [/in traditional gaming]/ because of the cost it takes to compete,” he said. “All the big studios are investing tens of millions into a game, hopefully having a big success... [/whereas]/ it costs Roblox nothing to bring a new game on board.”

The 18 million “experiences” available on the platform stretch across genres, ranging from unofficial versions of other titles, recreated with Roblox’s signature blocky characters, to digital pet adoption simulators and virtual cities where young users can build homes, earn livelihoods and socialise.

Developers can earn money by selling in-game items such as pets or weapons in exchange for the platform’s digital currency, Robux, which is purchased with real money. Almost one-half of the earnings are split evenly between the company and developers, with the remainder goes to platform costs such as hosting and app store and payment processing fees.

Roblox said developers have earned $209.2 million up to the end of September this year, compared to $72.2 million during the same period in 2019.

“I wouldn’t say it’s mainly been successful [in encouraging innovation and retaining creators] because of developers being able to make money, but I do think it plays a role,” said Tom Wijman, senior analyst at market research group Newzoo.

John Poelking, senior gaming analyst at Mintel, said that young gamers were spending more of their own money on small in-game purchases. Data from pocket money app RoosterMoney showed that Robux is one of the top products for which children are saving this Christmas.

Mr Wijman emphasised that Roblox’s appeal, like that of Epic Games’ Fortnite, had transcended the pure gaming space. “It’s becoming an alternative place to hang out with friends... like another form of social media or perhaps even replacing social media,” he said. Some popular games, such as MeepCity, offer social role-play experiences similar to Second Life or Club Penguin.

Roblox’s status as a public square had been heightened by events including a virtual performance by rapper Lil Nas X in November, which was viewed 33 million times, according to the company. In April, a similar event on Fortnite by musician Travis Scott was viewed more than 45 million times.

Mr Warneford said that while Roblox still lacked polish in a number of areas, including its developer tools, these were “low-hanging fruit” for the company. “All of that is solvable [/given]/they managed to get [/more than]/ 150 million players every month without professionals making the games.”

The pandemic surge in demand was also unlikely to evaporate, said Mr Wijman, based on data coming out of Asian markets that have left or are leaving lockdown. “Perhaps the level of engagement?... will fall a little when there are other things to do,” he said. “But we don’t expect a large decline when the world goes back to normal.”

2 Daimler to cut out suppliers to fund software hiring spree