Note to doctors: Medxnote will make your 1980s-style pager obsolete

Fed up with using pagers and paper, radiographer Niall Rafferty came up with Medxnote, a secure communication app for medical staff 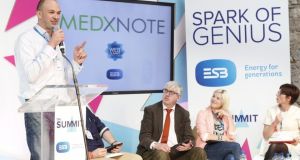 Get the message: Niall Rafferty talks about Medxnote at the ESB Spark of Genius competition in conjunction with Web Summit.

Niall Rafferty believes healthcare communication is stuck in the 1980s. Despite all the advances in technology, hospitals continue to rely on fax machines, internal mail and pagers.

“Doctors are still using pagers and administrators are pushing carts full of paper files around hospitals. Communication is at the heart of everything that is wrong with today’s healthcare system,” he says.

As a young radiographer, Rafferty realised he couldn’t wait around for big, multinational companies to improve decades-old technology in hospitals.

If he wanted to see change, he would have to make that change himself.

“When you are 18 years old and dream of becoming a doctor, you want the best technology to work with and the best medication for patients. The reality you are faced with is decades behind,” he says.

He set out to develop a solution to carry medical communication into the 21st century.

“I had this big idea burning in my belly and really wanted to make a difference. I was working in a hospital at the time and experienced all of this outdated technology first-hand. The need for new communication tools was there, but the industry simply wasn’t responding with the right solutions.”

Medical workers all over the world are currently making notes on their phones, texting colleagues and using messaging apps such as WhatsApp for both professional and personal use, says Rafferty.

“Doctors are mixing up their personal lives with the lives of their patients. Their smartphones are filled with images of amputated thumbs sitting alongside photos of children, pets and significant others,” he says.

Rafferty attended Google’s Start-Up Weekend in Dublin in June 2013, where he had just 60 seconds to pitch his idea for Medxnote to the masses. He had been told participants would have to pitch their idea, form a team and build a start-up within 54 hours. He took this a little too literally, actually bringing a sleeping bag along to Google HQ with him.

After winning first prize at the event, Medxnote went from strength to strength, being elevated to “high potential start-up” status and securing a place on the National Digital Research Centre’s LaunchPad programme along with €20,000 in seed funding.

“Having successfully landed a spot on the LaunchPad programme in September of last year, I knew it was time to quit my job and put all my efforts into Medxnote. It was an incredible feeling to know that I had this big chance to build something that could make a difference.”

Rafferty says every day has been a challenge. He has had to build a new level of tolerance to difficult situations and is still finding his way around the business environment.

“There’s no manual telling you what to do or how to do it. You’re bound to make mistakes. The key is to realise when you are wrong and to address the issue. If you don’t make mistakes when setting up your own business, you must be doing something wrong,” he says.

Medxnote is currently being piloted in Ireland’s largest hospital, St James’s, and in one of the country’s top private hospitals, Blackrock Clinic. Rafferty and his team hope the app will ultimately be used in hospitals around the world.

“If we get it right here, we will get it right anywhere,” he says. “We already have interest from hospitals as far away as Australia, which is very encouraging.”

In addition to Medxnote being used as a secure messaging and desktop application, Rafferty hopes it will be used to record patients’ medical information, which can then be exported to their electronic files, thus replacing the old and redundant paper system.

“It’s an exciting time to be involved in healthcare and we really want to be a part of that. We want Medxnote, and Ireland in general, to become a centre of excellence for healthcare software. We want to take healthcare into the digital age.”