Maeve Culloty: ‘My energy comes from the challenge’ 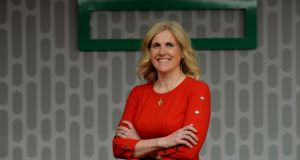 Hewlett Packard Enterprise’s (HPE) Maeve Culloty knows all about being a visible female role model. In November she took over as managing director of the Irish arm of the company, and she has been working to put her mark on it in the three months since.

There is a considerable opportunity for HPE in Ireland, with Culloty describing the company as part of the national infrastructure. Its clients span the public and private sector, so if the technology fails, HPE is in the spotlight. And its rivals, including heavyweights such as Dell Technologies and Oracle, would be primed to step into HPE’s place.

Culloty has worked for HP for more than a decade, starting out in its financial business. Her working life actually began at the age of 12 in sad circumstances.

Her father, a chef, died with her mother stepping in to run the family restaurant business.

“She had three young children, 14, 12 and nine, and she had to pick up all the pieces and run a business in a town where all the businesses were run by men,” she says. “That’s been a huge component of giving me my backbone.”

Heading up HPE may be a daunting task, but it is one that the Kerrywoman welcomes. This is the first time the organisation will have an executive focused solely on Ireland since Martin Murphy left the role in 2016, almost a year after the company was formed following the split from HP Inc.

Marc Waters was appointed to head up HPE in the UK, Ireland, Middle East and Africa, but with the Irish business showing considerable growth, the decision was taken to have a separate role. Culloty now reports directly to him.

One of the most frequent things I get is ‘you’re not a technologist, Maeve’. I don’t feel I need to be in order to lead the business

HPE is a changed company from the original Hewlett Packard entity which split in two in 2015, with HP taking the PCs and printers business, and Hewlett Packard Enterprise building the servers, software, networking and storage.

HPE made its debut on the New York Stock Exchange on November 2nd, 2015 and investors in HP were also given shares in the new HPE.

The latter was the faster growing part of the company at the time of the split, and it currently employs about 600 people in Ireland. “Hewlett Packard is in our DNA,” says Culloty.

Hewlett Packard may be in its DNA, but technology certainly wasn’t in Culloty’s before she started working with HPE Ireland. A business studies graduate from the University of Limerick, she qualified as chartered accountant and worked in the banking sector.

The move to technology was an accident, she says, when she was looking for another opportunity.

She took up a management role in the Leixlip-headquartered Hewlett Packard International Bank which helps customers lease, acquire and manage their IT assets and while she was experienced in the banking sector, tech was new to her. “I was used to the banking environment, and used to financing. But I had to figure out the technology, and how do we add value to the company as a bank,” she says.

“Figuring out the strategic importance of having a captive bank as part of Hewlett Packard Enterprise, that was all really interesting.”

From there, she moved into a customer operations role, and began to get calls about products. “Slowly but surely you start to get to know the product, you start to get to know what matters to our customers, what matters to our partners,” Culloty says. “ I went into a business development role and started looking at the landscape and how we could do business differently. It happened very naturally.”

She credits a large part of her rise through the company to the management team, saying it cultivated employees and pushed them forward. “I was one of those women who would look at a job and say, ‘that’s the reason why I can’t do it’. I was really lucky. I was sponsored by a number of different leaders that said I could do the job if you got certain experience,” she says. “I went off, I got the experience that I was missing. I knew that I was a strong enough candidate to go forward.”

With a young family to consider alongside her career, Culloty has a delicate life balancing act to figure out. But she is realistic about things.

Travelling a lot in the past 10 years in particular, she has learned to identify when that happens and move quickly to sort it. “Your children are brilliant at telling you very quickly, ‘you haven’t been around mom’. My husband would say we haven’t had a date in weeks or whatever it is. So that’s that. You’ve become off balance, so you need to backtrack and fix it.

“You get the date in the diary officially. Once a month, I’ve committed to the kids that I would be at the gate to pick them up from school. So just watch out where your balance is, and if it’s going to go off the rails – because there are times when it has to go off the rails – figure out how you’re going to pull it back. Put the holiday in the diary, look forward and figure out where you are going to get the rebalancing, because when you don’t, that’s when everything suffers.”

When she was going for the HPE role, and even in previous roles, people questioned if it was wise to follow the career path she has chosen.

“People questioned it, you know, [saying] ‘are you sure? You’re a mom, you’ve got a family that you need to stay committed to’. If I’d listened to that, my career wouldn’t have grown and evolved. What motivates me and gets me out of bed in the morning, a large part of that is my career. It’s where I got a large part of my energy from.”

Her advice? “Don’t listen to the naysayers.”

With a strong role model to learn from, it is little wonder that Culloty has found herself in her current position. But that doesn’t mean she’s pulling the ladder up behind her. She is particularly passionate about Stem (science, technology, engineering, and mathematics) and encouraging young girls to take up careers in the field, and showing them what it could potentially look like.

That is partly down to her own experiences with her children – Culloty has a daughter and a son.“I see my daughter struggling with Stem, and I’m specifically helping her because she’s at that critical age of 10. If I lose her now, and she drops back and doesn’t commit, she’s at risk of being one of those girls [who says] ‘science, tech, you know, math isn’t for me’.

“She just needs that little bit of extra support. My eight-year-old boy, he’s a little human calculator, for whatever reason. I know it’s really important that I support her in this. What worries me is I see it, [but] do other parents see their daughters perhaps not being supported? I think we need to support the education system.

“We need to help our daughters in understanding that Stem is very important, [that] there’s different ways of looking at Stem. And just because you’re not good at pluses and minuses, it doesn’t mean you’re not good at maths. I’m getting more and more passionate about this, because I’m seeing it everywhere I go.”

Getting some downtime is a crucial part of keeping her life in balance. The cliche is the executive on the golf course, but for Culloty, running keeps her on an even keel.

“My mental health comes from that. The amount of stuff I sort out in my head when I’m running; I could be wound up like a clock leaving the house and not actually wanting to go for run but I come back and I’ve the world sorted.”

Like her career, Culloty says she is goal oriented in her running, too. She has already run two marathons, improving her time considerably the second time out to close to four hours. Unsurprisingly, she has a goal in mind for the third, in terms of time, but she doesn’t want to elaborate just yet. “Then I’d have to do it,” she laughs.

Like any tech company, heading up HPE isn’t an easy task. Conscious of its responsibilities, the company is focusing more on sustainability, and how it can help its customers get more from less. On the day of the interview, Culloty has been delivering a keynote speech at HPE’s sustainability summit. It may not be an area that she saw leading when her career started out, but in front of the gathered partners and media, that never shows.

What advice would she have for young people seeking to carve out their own career?

“Find out what you’re lacking, and look up to see who’s doing it. Watch and copy,” she says. “When I was having performance reviews with managers I would ask ‘what am I missing? What else so I need to be doing?’. They were telling me, and I’d walk out of the room wondering ‘how do I do that?’.

“You can read books, you can listen to podcasts, but find out who does it really well. And copy. I really felt that with the fastest way to actually learn, develop my own skill set. Just figure out what skills you need to acquire and watch somebody else doing it and figure it out from there yourself.”

It is a strategy that has served her well. But even so, there are always questions. And Culloty, as you would expect, has the answer.

“One of the most frequent things I get is ‘you’re not a technologist, Maeve’. I don’t feel I need to be in order to lead the business. I need to understand the technology and what it does in terms of the business outcomes that we’re driving,” she says.

“But I think the most important thing that I need to do is understand the marketplace, how we play, bring my team in behind me to follow through on that, and support our customers and our partners. I just I don’t need to be a technologist to do that. I’m very okay with that because I believe I’ve a broad spectrum of skills that I’ve deliberately acquired over time, and that that allows me to be put in the position. The technology? I can learn it.”

Something you would expect: She is very goal oriented, and is currently working on her marathon time.

Something that might surprise you: If she wasn’t heading up a major tech company in ireland, she would probably be a chef. Her parents owned a restaurant.