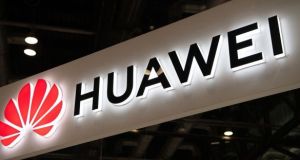 Eir recently reaffirmed it has no plans to drop Huawei from its network despite pressure from the US government on telcos globally to do so.

The Irish arm of Chinese telecoms company Huawei has warned of the impact of the Covid crisis on the business as it reported a sharp rise in profits and revenues last year.

Huawei Technologies Ireland, which employs over 200 people across Dublin, Cork and Athlone, recorded a 38 per cent jump in turnover from €119.5 million to €164.8 million. Pretax profits rose from €4.8 million to €5.5 million as shareholders’ equity climbed 32 per cent to €18.8 million.

The company said the Coronavirus pandemic has impacted the business and that 2020 revenue targets might not be met as a result.

Huawei Ireland’s strong performance last year came despite the impact of restrictive sanctions from the US government that have made it more difficult for the company’s Chinese parent to operate.

The subsidiary attributed the rise in revenues to an increase in handset sales and wireless projects.

“2019 was a very solid year for our Irish business, as our team forged ahead with a singular focus on creating value for both our business customers and individual consumers,” Tony Yangxu, the new chief executive of Huawei Ireland

“Our carrier business continued to perform well, providing innovative telecommunications equipment to our Irish business partners. Building upon the success of 4G network construction over the last two years, Huawei is now focused on helping our business partners roll out 5G across Ireland,” he added.

Eir last week reaffirmed it has no plans to drop Huawei from its network despite pressure from the US government on telcos globally to do so.

In newly filed accounts for its Irish subsidiary, Huawei said it was continuing to push back against criticism.

“During the past two years, unfounded and unsubstantial security concerns spread across international media regarding the network technology related to Huawei’s 5G technology. Huawei continues to assure governments and customers that network security is its absolute priority,” the company said.

Direct cost and administration expenses at the Irish unit increased in 2019 due to turnover growth and a rise in employee numbers, the company said.

Last October, Huawei announced plans to create 100 new jobs in the Republic over the next three years. The world’s largest telecoms equipment maker has ramped up activities locally recently, announcing plans to invest €70 million in R&D last year in addition to the €35 million already invested since 2015. It also recently transferred many of its mobile software services to an Irish subsidiary called Aspiegel.

Founded in 1987, Huawei employs more than 180,000 employees across 170 countries and regions. While initially focused on manufacturing phone switches, the company has significantly expanded its business over the years to include building infrastructure equipment used in mobile and broadband internet networks, including for 5G. It is now also the world’s largest smartphone manufacturer after recently surpassing Samsung.