Case relates to $10.3bn price Hewlett-Packard paid for the UK software maker in 2011 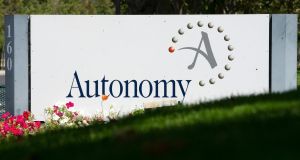 The former chief financial officer of Autonomy was found guilty of orchestrating an accounting fraud to arrive at the $10.3 billion price Hewlett-Packard paid for the UK software maker more than six years ago.

A jury voted to convict Sushovan Hussain Monday on all 16 counts of wire and securities fraud after three days of deliberations in San Francisco federal court.

Autonomy was the UK’s second-largest software business when Hewlett-Packard acquired it in 2011. Hewlett-Packard later wrote down its value by $8.8 billion, citing fraud by Autonomy and asking the US Justice Department to investigate.

The guilty verdict is a win for prosecutors in an office that has suffered recent losses, and at least partially vindicates Hewlett-Packard.

It also gives the company momentum as it heads toward a trial next year in London in a $5 billion civil suit against Hussain and Autonomy co-founder and former chief executive Mike Lynch.

“The jury verdict affirms that corporate criminals who cook their company’s books to the detriment of victims in the United States, and specifically this district, will be held to account in our courts,” acting US Attorney Alex Tse said in a statement.

Hussain faces as many as 25 years in prison for securities fraud, the most serious offense.

The US accused Hussain of spinning his company’s financials to create a false appearance of growth.

At trial the government presented emails, phone records, earnings statements, press releases, and even an alleged payment of “hush money” to show what prosecutor Adam Reeves called “a balance sheet of fraud”.

From 2009 to 2011, when most technology companies were struggling in the wake of the 2008 financial crisis, Hussain built a facade to “eek out consensus estimates” of Autonomy’s revenue ahead of the merger with Hewlett-Packard, Reeves said in his closing argument.

Autonomy by late 2011 had become an “unsustainable Ponzi scheme,” he said, leading Hussain to exhort Lynch to sell the company. Hussain was “desperate,” and “constantly anguishing, and looking for revenue,” Reeves said.

Keker, Hussain’s lawyer, argued that HP bought, and then hobbled, an increasingly profitable software company. It was one of a string of failed acquisitions requiring write-offs, a list that includes Palm, Compaq, and Electronic Data Systems, he said.

Keker described a Hewlett-Packard “machine” that deployed an army of company lawyers and consultants to support the government prosecution, which he said relies on false testimony from cooperating witnesses who buckled under “tremendous pressure”.

“They’re trying to make this Englishman into a criminal, when committing a crime was the furthest thing from his mind when he was working,” Keker said, referring to Hussain during his closing argument.

“Everybody gets a pass but he’s supposed to be a criminal. This case belongs in a civil case in London where it already is.”

The US cooperated with the Financial Reporting Council and Serious Fraud Office in the UK, Tse said.

Hewlett Packard Enterprise, formed in the breakup of Hewlett-Packard’s corporate computing divisions from its printer and PC business in 2015, is pleased with the verdict.

“Hussain engaged in outright fraud and deliberately misled the market about non-existent sales through a series of calculated sham transactions,” Emmanuel Fyle, a spokesman for HPE, said in an emailed statement.

“The jury has now held him accountable for his role in defrauding HP.” – Bloomberg