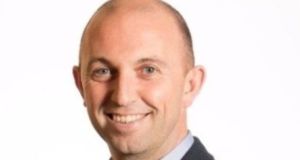 Fenergo founder and chief executive Marc Murphy “We’re continuing to sign up the biggest banks and financial services institutions in the world...”

Irish fintech Fenergo is looking at a number of potential acquisitions as it looks to scale up faster. The move comes as the company, which was valued at $800 million last year following an investment round, has continued to see strong growth despite the Covid crisis.

Speaking to The Irish Times, Fenergo founder and chief executive Marc Murphy said it had taken on an additional 100 employees in 2020, had experienced growth in every area in which it operates, and secured 25 new contract wins.

Mr Murphy forecast revenues of around €95 million for the year to the end of March 2021.

Fenergo develops solutions for financial institutions that helps them with issues such as regulatory compliance and managing client data. Its customers include BBVA, ABN Amro, Bank of China, UBS and State Street.

In recent years, the company has expanded into new sectors such as asset and wealth management, and in doing so has added key customers including Royal Bank of Canada, UBS and Mizuho.

“We’re continuing to sign up the biggest banks and financial services institutions in the world, with the likes of JP Morgan coming on board lately,” he said.

The company was linked with a flotation, and Mr Murphy has long said an initial public offering (IPO) of shares is an ambition for the company.

“Public markets are still in love with assets like Fenergo, and we continue to explore an IPO among other options,” he said.

The company, which was recently named Irish technology company of the year, is also actively looking to make its first acquisitions to fuel further growth.

“We have a real ambition to acquire over the next 12 months and have been building a team to focus on that. The market is pushing us to add some bolt-ons and there are four of five acquisitions over the next two to three years that we are targeting, and I hope to have at least two of them done by the end of 2022,” he said.

“At the moment we’re largely operating in the on boarding and origination space, but the market is actively encouraging us to be in the area of transaction compliance and beyond that as well. I think that as we are we can get to $250 million, but I’m looking to get us to the $500 million mark,” Mr Murphy added.