Female wartime ‘computers’ would be aghast at pay gap

Seventy years on from female programmers’ work for the Allies, too little has changed 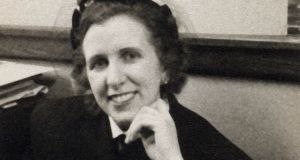 Kay McNulty Mauchly Antonelli, one of the Eniac programmers

In 1999, two historic “computers” arrived in Ireland. Not the chips-and-wires kind. This pair had big hearts, sharp minds and real guts. Kathleen (Kay) McNulty Mauchly Antonelli and Jean Bartik were two of six of the world’s first computer programmers – all women – who worked with the world’s first electronic computer, a legendary Goliath called Eniac (Electronic Numerical Integrator and Computer).

The other four were Betty Snyder, Marlyn Wescoff, Ruth Lichterman and Frances Bilas.

9 Fauci reveals what it was really like working for Trump

14 Blindboy Boatclub: ‘I had the choice of being a psychotherapist or a mad bastard’

19 ‘I worry about my child falling behind, but my own work is beginning to suffer’

20 Traveller who tried to book hotel wedding awarded €15,000 for discrimination

22 Mary Lou McDonald: Government must be active in conversation on a united Ireland

24 Eat, move, think: What you need to know about children’s health (teenage girls)

29 Walk this way: 17 tips for getting the most from your daily lockdown outing

33 We think we have enough for a deposit. Should we buy now or rent a bit longer?

36 Why should the Leaving Cert have to be ‘brutal but fair’?

37 Suzi Quatro: ‘If he’d done that backstage he’d have been singing soprano for the rest of his life’