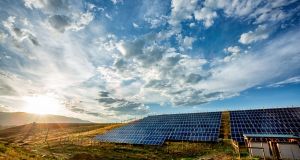 The selection by ESB and Bord na Móna of bog lands for solar development has been criticised by John Mullins of Amerenco Solar. (Photograph: iStock Photo)

The ESB and Bord Na Móna co-development agreement on solar power could raise “a question of State aid”, according to John Mullins, chief executive of Amerenco Solar.

Mr Mullins argues that the question could be raised on the basis that the companies involved could gain an economic benefit from the development of solar energy activity using land that was intended for peat production, for which they got aid from the State.

Mr Mullins went on to criticise a number of elements of the agreement, which he calls “a state mega merger”. Speaking to The Irish Times, he cited problems with the land that ESB and Bord Na Móna have set aside for solar development, saying that bog lands are not ideal for solar development.

In a statement to The Irish Times, a spokesperson acting on behalf of ESB and Bord na Móna rebuffed Mr Mullins’s claims, saying: “These developments provide a significant opportunity to re-purpose cut-away peat lands. They can be built at a scale that enables cost-efficient delivery of zero carbon energy to the Irish market.”

Both companies involved and the Government dismissed the accusation of State Aid. A spokesman for the Department of Communications, Climate Action and Environment said: “As there is currently no Government support scheme in place for Solar PV in Ireland, it is unclear how this commercial decision could be considered as State aid. This investment decision appears to be a commercial decision taken by ESB and BnM.”

Despite the issues associated with the development, Mr Mullins, a former chief executive of Bord Gáis, welcomed the commitment of the Minister to the use of solar power. However, he pointed out that the Minister hasn’t engaged with the Irish Solar Energy Association, nor has he set out a policy on solar power.

A spokesperson for the Department said that the 2016 Programme for Government contains a commitment to facilitate the development of solar energy projects in Ireland, but, he said: “Solar PV technology in the context of renewable electricity generation is not supported under any of the existing renewable electricity support schemes in place in Ireland.”

The co-development agreement, which was announced on April 27th, is said to have the potential to power 150,000 homes.

Amarenco solar is an independent power company and provider of solar power plants.