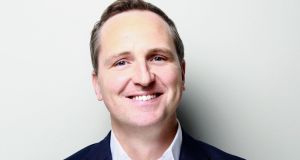 John O’Dwyer of Element Finance: “VC investment is of course an option for companies but it isn’t always the smartest move for them to make.”

Tech-focused investor Element Finance is looking to step up its activities in Europe via Dublin with more than $50 million (€41.2 million) available to lend to scaling companies.

The US-headquartered firm, which was co-founded by Irish entrepreneur Ed Byrne, provides venture debt funding for software-as-a-service (SaaS) companies with at least €1 million in recurring revenues that are seeking growth capital.

Established two years ago in the US, as a spin-out from Mr Byrne’s San Antonio-headquartered Scaleworks, Element typically provides lending of €1 million to companies but can do loans of between €500,000 and €5 million.

Documents recently filed with the US Securities and Exchange Commission show it recently raised more than $15 million in equity funding as it looks to back more European companies. Overall, Element has backed 25 companies to date but most of these have been US-based firms.

Element is led by John Gallagher, former investment director at the Ryan family’s Irelandia, and John O’Dwyer, who previously served as head of strategic investments and ventures at AIB, during which he led the €100 million acquisition of Payzone by Fiserv and the bank.

It was originally founded as the finance division of investment firm Scaleworks, a $150 million venture equity fund co-founded by former Hosting 365 general manager Mr Byrne and Rackspace founder Lew Moorman. Among the Irish companies it has backed are Chargify and Profitero.

Element was established amid growing frustration at the lack of availability of debt for tech companies outside big brands such as Silicon Valley Bank.

Mr O’Dwyer said a key advantage for companies availing of debt funding is that, unlike other kinds of funding, loans are non-dilutive so businesses don’t have to give up equity.

“There are a huge amount of SaaS businesses and many of these are being underserved by banks because they often don’t have the skills required to assess their business models. That coupled with the fact there is such a huge volume of cloud companies now means we are serving a vital role,” he said.

“VC investment is of course an option for companies but it isn’t always the smartest move for them to make,” Mr O’Dwyer said.

Element intends to take on additional staff in Dublin as it grows its operations outside the US.

“The objective for me for the rest of the year is to establish a presence here to see if we can provide more loans across the Irish market and across other countries in Europe,” Mr O’Dwyer said.