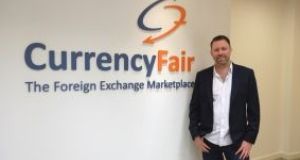 “We were global from day one”: CurrencyFair chief executive Brett Meyers

Irish fintech company CurrencyFair is expanding its offering to businesses in the UK and has taken on a heavyweight chairman to help it push into overseas markets.

The firm, which last year raised €10 million in a funding round, provides a money exchange platform that aims to help users avoid large charges for exchanging foreign currency. Its average fee is 0.35 per cent, compared to between 2 and 5 per cent for other services.

Established in 2009, CurrencyFair announced a major push to target Irish businesses earlier this year by offering fee-free international money transfers. The firm is now widening the promotion to companies in the UK as it looks to raise its profile there.

“We never really started off just servicing the local market. We were global from day one and many of our customers, while they might have been Irish, were living overseas,” said chief executive Brett Meyers. “The UK has been our biggest market from the beginning, so we’re looking to expand on that, but there are also other markets that we’re not in yet that we intend to move into as well.”

Although much of CurrencyFair’s income still derives from individual users, the company has been increasingly targeting business users of late.

“Businesses account for about 15 to 20 per cent of our volume, and they are good customers who are getting a lot out of our platform. We decided to start dedicating some resources to tailoring the product to business customers, although this isn’t at the expense of individuals,” Mr Meyers added.

CurrencyFair, which in early 2014 became the first platform in the world to break the $1billion barrier in money-matching transfers, has also announced the appointment of Richard Rose as chairman.

Mr Rose was previously chairman of online domestic-appliance retailer AO World, which floated in a £1.2 billion initial public offering (IPO) in February 2014. He is also chairman of the Alternative Investment Market (AIM)-listed Crawshaw Group and of fashion retailer Blue Inc, and previously held the same role with cash-and-carry group Booker.

Although initially well-regarded by AO shareholders, Mr Rose upset many of them when the group’s share price fell by 9 per cent after he sold off most of his stake in the firm a year after it went public.

“From my time with AO, I’ve seen the internet disrupt traditional models of shopping for electronics, forcing the incumbents to up their game and evolve with the world, and now it’s time the banks did the same. CurrencyFair is a leading example of that exact phenomenon,” Mr Rose said.