Chris Johns: Are you ready for the driverless revolution?

No car in the drive, no car parks, no insurance: it’s all about to happen 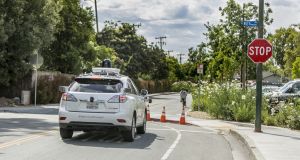 The near future? A Lexus RX 450h modified by Google to be a self-driving car. Photograph: JasonDoiy/Getty

Disruptive technological change has wrecked the business models of travel agents, the music industry, telephone companies, TV producers – the list is long and growing. Most old-fashioned jobs are now thought likely to disappear, thanks to the internet.

While technology has yet to give us flying cars, one of the biggest changes of all is almost with us: driverless cars. A favourite pastime of futurologists is to think about the unintended consequences of the imminent shift to self-driving vehicles.

Most obviously, the jobs of drivers will vanish. In the US, for example, more than three million people make their living by operating vehicles of one kind or another. Once most of those have become redundant or have retrained, the jobs of people working in the motor insurance industry will also disappear.

One of the huge advantages of driverless cars and trucks will be a huge reduction in traffic crashes. There will still be accidents, but they will be far fewer and, hopefully, not caused by the cars and their software. Some 30,000 people die every year on US roads, but once the autonomous vehicle dominates the highways that number should fall dramatically and, with it, the need for most car insurance.

The car industry itself will also be hugely disrupted. That’s why so many of the major auto manufacturers are racing to become producers of driverless cars. They understand that most cars spend most of their lives parked. When we are reliably able to hail a driverless vehicle at the touch of a smartphone app, we will quickly realise that we no longer need to own a car. Just as we now stream music rather than buy an LP or CD, we will rent cars rather than buy them. And that will mean a much smaller number of vehicles, many of which are on the road most of the time rather than sitting idle in a car park.

That means car parks will no longer be needed. Just think about all that inner-city and urban space that will be freed up. Modern houses that are designed around the double garage will be anachronisms. Shopping centres will no longer need acres of car-park space. For example, Dún Laoghaire in Co Dublin will no longer be a retail disaster zone: you might not drive there currently because you can’t park or, if you do, you fear being ticketed; in future, shopping in places such as this will be easy.

Traffic wardens will also become redundant. Police forces the world over will have to find a new source of revenue when speeding fines disappear. Makers of speed cameras will go out of business.

Banks will no longer make money by lending for car purchases. Petrol stations will vanish, as the self-driving cars will be electrically powered. Governments will have to start taxing electricity as the tax revenue from petrol and diesel collapses.

How much of this is imminent? Talk to anybody involved and they are convinced that, within a few short years, most or all of these trends will be firmly established. The technology exists, it works and is, they claim, safe.

There are dissenters, of course, who point out that the technology has in fact been around for decades and, for one reason or another, has failed to take off. There used to be a popular programme on BBC called Tomorrow’s World, and back in 1990 one of its episode featured a working driverless car. (It can be seen on YouTube.)

The investment bank Morgan Stanley recently listed the arguments explaining why adoption of the technology has been slow. One problem is the capital cost: it is very expensive to build a car plant of any kind and very difficult to consistently make a decent return on the massive amounts of capital investment involved. The amounts of money already sunk in traditional capacity are huge and enable large numbers of affordable cars to be produced. That’s not quite so true for self-driving cars.

There is also the issue of liability. The software for self-driving cars will explicitly involve decisions over what type of crash the car has. If a sudden manoeuvre is necessary to avoid hitting one pedestrian, but in turn requires hitting another, the car will have to choose which person to injure or kill. And that will involve potentially huge legal liabilities, something that has spooked the tech companies involved.

Another factor is cultural: we still insist on drivers for trains, although they haven’t strictly been necessary for decades. Perhaps something similar will slow the adoption of self-driving cars.

My own guess is that the pessimists are wrong. Adoption will be rapid, but only when the economics stack up. The new vehicles will have to be cheap, with a demonstrated safety record and an ability to turn up within a very short space of time. I agree with the industry that a lot of this will be with us within five years or so.

All sorts of opportunities will be presented by these new technologies. For example, now might be the time to invest in pubs, long thought to be in terminal decline, partly because of drink-driving laws. Taxis are often scarce when you need them the most, or seem non-existent in rural areas. So long as the law allows drunks to hail an autonomous vehicle, going out to the pub may experience a renaissance.