Net Results: The Democratic candidate has support of tech industry and its biggest critics 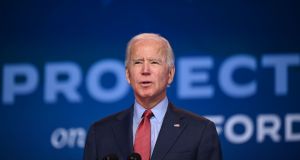 Until recently, US presidential candidate Joe Biden’s campaign had offered only random signals as to its position on most of the major technology-related issues in the United States and internationally. But, as the presidential contest has galloped into its final weeks, the picture is coming more into focus – albeit in a totally contradictory way.

On the one hand, there’s now plenty of evidence that many of the best-known names in technology, as well as tech workers as a whole, overwhelmingly support Biden.

8 Can five minutes’ exercise a day make you fit?

9 Growing pressure for ban on non-essential travel within EU

13 Cold and working from home? How to stay warm without whacking up the heating

16 The left’s lockdown critique: Right on, or dangerous prattle?

21 Covid-19: Lockdown to be extended until late February as ramping up of vaccines promised

31 Miriam Lord: Back to school for foot-in-mouth specialist Josepha Madigan

34 Cottage with investor appeal in booming D4 enclave for €650k

36 Every adult in Ireland to have Covid-19 vaccine by September, Minister for Health says

37 Covid-19: Europe warned to prepare for surge in deaths due to British variant

38 What is Ireland’s plan for vaccinating people against Covid-19?

39 The lockdown may squash the virus but what will it mean for Ireland's economy?