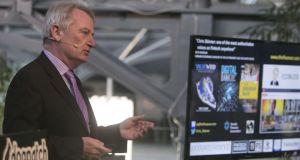 Only a handful of financial institutions are truly embracing digital change, leaving plenty of opportunities for financial technology (fintech) firms in Ireland and further afield, according to one of the world’s leading financial services experts.

Chris Skinner, a well-known commentator, speaker and writer who has been rated as one of the 40 most influential people in fintech by the Wall Street Journal, said the failure of banks to innovate was good for entrepreneurs looking to disrupt the sector.

“The banks have millions of customers, centuries of history and billions in capital and that is their strength. Their weakness, however, is their lack of vision,” he said.

The author of a number of best-selling fintech-related books, Skinner has served as an adviser to the White House, the World Bank, and the World Economic Forum. A popular blogger, he has also worked closely with some of the biggest banks in the world including HSBC, the Royal Bank of Scotland, Citibank and Société Générale.

Speaking at Enterprise Ireland’s Future of Fintech event at Dogpatch Labs in Dublin recently, Skinner said banks were largely focused on “innovation theatre” rather than on real change that bring benefits to customers.

“They aren’t really embracing digital, they are just paying it lip service,” he told delegates.

“Financial institutions have appointed chief digital officers, allocated budgets and started projects to develop innovative banking services, but what is really needed is core cultural change from the top down and few banks are looking at really changing how their organisation thinks and operates.”

He noted a small number of exceptions, including BBVA, whose executive chairman Francisco González, started out as a programmer. But, he said for the most part, few banks are focusing on real change.

Skinner, whose comments come just weeks after the second Payment Services Directive (PSD2) became law across the European Union, unleashing a new world of open banking, said there were a lot of opportunities for fintechs in the years ahead. This is due in part to traditional financial institutions becoming curators, who would look at bringing the best banking services together on behalf of customers, rather than continuing to develop their products.

However, he warned that banks were unlikely to disappear any time soon, noting that in the UK, the average marriage lasts 12 years but people keep the same bank account for 17 years.

“People stay with their bank longer than their partners. Financial institutions will remain as strong as ever because people are slow to give up their banks so they are needed to bring about change. Those that open up, co-create and curate by bringing the best services to their customers will thrive,” said Skinner.

Speaking to The Irish Times on the sidelines of the event, Skinner said the relationship between fintech start-ups and traditional banks was very much like that between a parent and child.

“The parent is all about safety, stability and security, whereas the child is all about breaking things apart and rebuilding again, so there will always be friction, but increasingly both sides have learned that working together has benefits,” he said.

Skinner also praised the strength of Ireland’s burgeoning fintech community. He highlighted Leveris as a “stand-out firm”, and expressed wonder at the success of online payments company Stripe, the firm established by the Limerick-born Collison brothers.

The commentator also described Brexit as “a gift” to Ireland’s financial services sector but added that the country has to move fast to take advantage of the possible benefits arising from it.

“Infrastructure build needs to be turbocharged for Ireland to take advantage and the challenge is whether it can deal with the changes in time. China is capable of completing big infrastructural projects in months, and in Dubai they built a new canal in just 18 months. That is the sort of mentally that is needed in Ireland,” said Skinner.