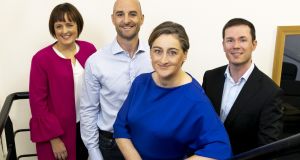 The funding came from two existing investors, Frontline Ventures and Bluff Point, with ACT also coming on board.

The Maynooth-based firm, which was last year ranked as one of the top 50 European businesses transforming financial services, was established by Ms Gibson in 2012.

The move to expand in Europe comes after a number of contract wins. Ms Gibson said the company was seeking to expand its business development operations, and sales and marketing in particular. The company is eyeing an office in Paris first, before potentially expanding into Luxemburg and Frankfurt.

AQMetrics, which provide risk and regulatory reporting services across different regulatory regimes, sees central Europe as the next growth centre for the business.

“More and more firms are looking for authorisation around Europe,” MS Gibson said. “Some of our very large customers are growing their operations in Central Europe; we’ll be supporting them.”

Ms Gibson said gaining ACT as an investor was a vote of confidence for the company.

“We are staying on course to be a true Saas provider serving the financial markets and industry,” MS Gibson said. “All of that was endorsed by having an external party looking at us and saying ‘yes we think this is the right thing’.”

The new funding brings the total raised to around €7million , with the company raising $3.25 million (€2.64 million) in early 2016 to fund its US expansion, followed by a further €1 million earlier this year. However, Ms Gibson said they would not be stopping there.

“We will always be looking at funding,” she said. “We have great ambitions in this company.

1 HSBC board rethinks overhaul and seeks even deeper cuts
2 ‘Over 1,000’ pubs have interest in Covid-19 insurance test case
3 Fruit and vegetable firm obtains interim court orders against technical manager
4 Will remote working mean an end for the corporate HQ?
5 Pricewatch: Coronavirus has given us four categories of shopper
Real news has value SUBSCRIBE