Swiss Leaks: US may scrap prosecution deal with HSBC

A team of journalists from 45 countries has unearthed secret bank accounts maintained for criminals, traffickers, tax dodgers, politicians and celebrities. 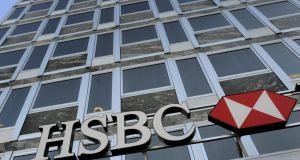 HSBC is the focus of a number of US inquiries. Photograph: AFP/Getty Images

HSBC bank found itself in the centre of a global storm yesterday in the wake of the disclosures concerning its Geneva bank’s dealings with clients linked to tax evasion and other criminal activities.

In the US the global bank, which was already on notice after it had to pay a $1.9 billion fine for allowing Mexican drug cartels use it for money-laundering, was back in hot water with suggestions that a deferred prosecution agreement with the bank could be scrapped.

Data stolen from the Geneva bank in the mid-2000s was seized by the police in France in 2009 and subsequently shared by the French tax authorities with their counterparts in a number of countries, including Ireland, the UK and the US.

Sherrod Brown, the leading Democrat on the banking committee that investigated money laundering and other scandals involving HSBC, said he will be seeking a full explanation as to what the US authorities have been doing since receiving the stolen files. HSBC is the focus of a number of US inquiries.

The Irish Times is a media partner with Le Monde and the International Consortium of Investigative Journalists, along with 45 other media groups, in a project based on the leaked data.

HSBC’s shares were down 1.6 per cent on the London Stock Exchange at the close of business, with the controversy said to have shaved eight points off the FTSE 100 index of blue chip shares.

Belgium, which is conducting a criminal inquiry into whether the bank aided tax evasion, said if it did not receive better co-operation, it would issue arrest warrants for current and former staff members.

Denmark, where the tax authorities had not yet sought the data, said it would now do so.

In the UK, the opposition Labour Party pointed out that prime minister David Cameron’s Conservatives recruited former HSBC chairman Stephen Green as a trade minister and put him into the House of Lords.

Margaret Hodge, the Labour MP who chairs parliament’s public accounts committee, asked why there had been only one UK prosecution over the HSBC files, which have been in government hands since 2010, and attacked Mr Green.

“Either he didn’t know and he was asleep at the wheel, or he did know and he was therefore involved in dodgy tax practices,” she told BBC Radio 4. “Either way he was the man in charge and I think he has got really important questions to answer.” Mr Green told the BBC he wasn’t going to comment.