US stocks close at record high, rebounding from Covid crash 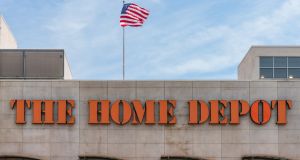 Home Depot reported sales growth that was more than double the already brisk rate analysts had been expecting on Tuesday. Photograph: Jeenah Moon/Bloomberg

The Iseq in Dublin stayed virtually flat on thin trading volumes, helped by a solid performance from the banks, which made up for dips at some of the exchange’s trade heavy hitters.

AIB rose more than 4 per cent to close the session at just under €1.08 per share. Meanwhile, Bank of Ireland closed ahead by 1.2 per cent to €1.90. Recruiter CPL Resources also rose by more than 2 per cent to €7.25, as the numbers at work rise and those on State supports continue to fall.

Dalata hotel group fell more than 3.7 per cent to €2.46. Its fall came as Davy stockbrokers warned that investors were ignoring “positive developments” at the company, which has suffered due to the State’s onerous restrictions on travel, which has devastated tourism.

The blue-chip Ftse 100 was down 1 per cent, wiping out gains made in the previous session, while the mid-cap Ftse 250 slipped 0.9 per cent.

Mining group BHP, among the heavyweights on the Ftse 100, slipped 2.7 per cent after reporting a lower-than-expected annual profit. The wider mining index fell 1 per cent, but was still among the handful of Ftse subindexes close to breaking even for the year.

Persimmon jumped 8 per cent after it said it would reinstate its dividend after an “excellent start” to the second half of the year, but posted a plunge in first-half profit.

Retailer Marks & Spencer slid about 5 per cent after saying it planned to cut a further 7,000 jobs due to the Covid-19 pandemic. Its Irish operations are unlikely to be affected.

Most major European markets were asleep for most of the session, edging only marginally higher as travel restrictions continued to weigh on sentiment. The German Dax increased 0.17 per cent, while the French Cac moved 0.21 per cent higher.

After hovering in positive territory earlier in the session, the pan-European Stoxx 600 turned decidedly lower in afternoon trading. The index closed down 0.6 per cent, still 15 per cent below its record high.

Banks and energy sectors were among the biggest drags on the Stoxx 600, down more than 1 per cent, with the latter hit by a slide in oil prices.

Danish jewellery maker Pandora tumbled 7.5 per cent as it expected sales to decline this year by up to a fifth, despite having reopened nearly all its stores.

The S&P 500 reclaimed record highs last seen before the onset of the coronavirus crisis in February.

Home building has shown some strength, with US housing starts picking up for a third straight month in July, but a reaction to strong results for Home Depot quickly evaporated as investors worried about the outlook going forward.

Earnings from Walmart also underlined that some areas of consumption had remained resilient through the pandemic, but its shares, too, quickly faltered.