US retailers hit by ‘worst year since 2008’ for discounting 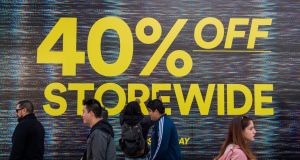 Jan Rogers Kniffen, a retail consultant, said of the current levels of discounting: ‘Outside of a recession, it’s the deepest I’ve seen.’

US department stores and clothing retailers, trying to weather the continued onslaught of online shopping, are resorting to some of the biggest discounts since the 2008 crisis to woo consumers, heightening concerns of a squeeze in profit margins.

With less than two weeks before Christmas, industry data show special offers have lasted long beyond the traditional Black Friday promotional period and are also steeper than in previous years.

“This is the worst year for discounting since 2008,” said Jan Rogers Kniffen, a retail consultant, of clothing and mall-based retailers. He noted that the discounts came in spite of robust US consumer spending. “Outside of a recession, it’s the deepest I’ve seen.”

Within the past week, executives at some retailers have put investors on notice over the scale of discounting.

Bob Madore, chief financial officer of American Eagle, told analysts that “an increase in promotional activity” was set to put pressure on the clothing retailer’s profit margins. “The beginning of the holiday season has been softer than expected,” he said.

The deep sales among the retailers hardest hit by the rise of online shopping come even though other retailers, including Walmart and Target, have sent reassuring signals over the financial health of the US consumer.

Mastercard forecasts that US retail sales will rise 3.1 per cent between the start of November and Christmas Eve from the same period a year ago, led by ecommerce.

At mid-market department stores, about two-thirds of merchandise was still on sale last week, according to data companies StyleSage and Refinitiv. Average discounts, at 27 per cent, were only slightly less deep than during the Black Friday weekend.

Jharonne Martis, director of consumer research at Refinitiv, said: “If companies continue down this path, it will put them at a higher risk of default.”

Government data published on Friday showed the figures for November were weaker than expected, although they still rose 3.1 per cent year-over-year.

However, sales at department stores dropped 7.2 per cent from a year earlier, clothing store sales 3.3 per cent and electronics and appliance stores 1.5 per cent.

Trade tariffs were a complicating factor, Ms Martis added. Although Washington and Beijing reached a partial trade war truce on Friday, retailers had already accelerated shipments through ports to avoid being subjected to the threatened tariffs. This had left some companies with extra inventory that they now needed to shed.

Retailers welcomed the trade agreement where the US will not go ahead with levies on $156 billion (€140 billion) worth of consumer goods from China that were due to be introduced on Sunday. – Copyright The Financial Times Limited 2019