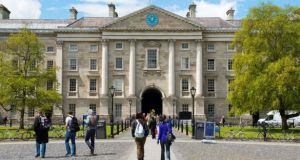 Trinity College Dublin is the highest new entrant on the Financial Times’ European business schools ranking for the year.

This marks the first time TCD has returned to the prestigious table since 2007. It is in 60th place in the “rankings of rankings”, a list covering a wide number of academic programmes including MBAs.

Trinity College was ranked in 46th place for its European MBA (EMBA) and 66th in the masters in management (MiM) rankings.

Prof Andrew Burke, the dean of Trinity Business School, welcomed the college’s inclusion in the rankings.

He said that since 2015, Trinity Business School had undergone a significant transformation.

“Along the way, we became the fastest-growing established business school in Europe for three consecutive years, moved into our award-winning €80 million new building in May of this year, and received the prestigious EQUIS accreditation placing us amongst the top 1 per cent of business schools in the world.

“It is great to see some of that innovation being recognised and while we have made a good entry point to these rankings, we expect to advance further up as the school continues to progress.”

UCD Michael Smurfit Graduate Business School improved its position in the overall rankings, climbing two places to 21st, the third consecutive year it has placed within the top 25.

The college was ranked 26th in the MBA ranking, 35th in the EMBA list and seventh in the MiM table. It also placed 22nd for open programmes.

“Our commitment to providing the highest quality in both masters and executive development programmes is important, not just to our students who benefit from best-in-class teaching and learning environments, but also to the Irish economy,” said Prof Anthony Brabazon, the dean of UCD college of business.

The Irish Management Institute (IMI), which was the highest new entrant in last year’s rankings, climbed eight places in the latest list to 68th, coming in at 34th for open programmes and 30th for custom ones.

“This progress in the European business school ranking clearly shows the quality behind what IMI deliver each and every day to the business community in Ireland,” said Prof Patrick O’Shea, president of University College Cork, which merged with the business school in 2016.

IMI entered the rankings for the first time in 2018, achieving 76th place.

1 Pilita Clark: When a rude boss keeps you waiting, why not walk out?
2 Money matters: ‘My father embarrassed us with his haggling’
3 Abtran challenges award of €63m contract by Irish Water to rival company
4 US threatens retaliation against EU over proposed carbon tax
5 NI house builder apologises to Harry and Meghan over adverts
6 Are there annual limits on inheritances or gifts to a child?
7 Comcast acquires Irish cloud-based telco Blueface
8 Volvo warns of scaled back car line-up if UK splits from EU rules
9 Opioid executive admits to ‘no morals’ ahead of prison term
10 Ryanair to pay portion of Peter Bellew’s legal costs, court rules
Real news has value SUBSCRIBE