Ruling said about 6,000 customers who were denied cheap mortgage should be put on one 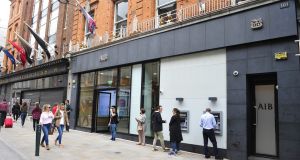 The cost of the tracker-mortgage scandal has topped €1.5 billion for the State’s banks after AIB revealed it has been forced to double the money it has set aside to deal with the issue on foot of a Financial Services and Pensions Ombudsman (FSPO) ruling.

AIB has taken an additional €300 million provision to deal with tracker-mortgage cases after the ombudsman issued a preliminary decision on an individual case which has a bearing on almost 6,000 customers who were denied a cheap mortgage should be put on one.

Previously, AIB had only offered this group of 5,900 customer €1,615 each for a “service failure” in late 2017. While AIB has admitted it denied this group the option of moving to a mortgage tracking the European Central Bank’s (ECB) main rate more than a decade ago, it has consistently argued that the prevailing tracker rate at the time would have been 7.9 per cent.

The AIB independent appeals panel had rejected all related appeals cases put forward by individuals from the affected group, according to Brendan Burgess, founder of online consumer forum askaboutmoney.com, who had co-ordinated a campaign around the issue.

“The board recognises that there is a range of possible outcomes and has created a provision of €300 million, which will be taken in full year 2019 financial results,” AIB said in a statement.

AIB said that it is in ongoing discussions with the Central Bank of Ireland on how it can treat the group of 5,900 affected customers. The preliminary ruling refers to one case, but AIB’s board has recognised, in taking the provision, how this translates across this cohort of customers.

A spokesman for the Central Bank said: “The Central Bank has clearly communicated to lenders our expectation that if any individual outcomes arise from the FSPO or court processes that have the potential to impact customers more widely, they then must address this broader impact.”

Shares in the bank, led for almost a year by chief executive Colin Hunt, slid as much as 6 per cent in early trading on Tuesday as the market digested the news.

“As the person who has led the campaign on this issue for four years and as the person who got the successful preliminary ruling from the ombudsman, I welcome the decision of the board to finally put the customer at the centre of things,” Mr Burgess said.

Mr Burgess also highlighted that Fianna Fáil’s Michael McGrath and Sinn Féin’s Pearse Doherty had put persistent and forceful pressure on AIB on the issue every time the bank appeared before the Oireachtas finance committee in recent years.

The latest provision brings AIB’s tracker-related costs to more than €600 million, including €35 million that was set aside in the first half of last year for an expected Central Bank fine as a result of an enforcement investigation. It pushes the industry-wide bill to more than €1.5 billion.

AIB said that it expects to propose an ordinary dividend of between 40 and 60 per cent of net earnings, leaving its common equity Tier 1 capital ratio, a keenly followed measure of a bank’s financial strength, at more than 16 per cent at the end of December.

Davy analyst Stephen Lyons said he expects AIB’s full-year dividend to be slashed to 6c from 17c for 2018.

“The provision comes as a surprise given our understanding that the industry-wide tracker-mortgage examination had moved on to enforcement stage,” Mr Lyons said, adding that the development takes away from AIB’s surplus capital and potential returns to shareholders. The State owns 71 per cent of the bank.

Goodbody Stockbrokers analyst Eamonn Hughes said: “Whilst AIB had previously highlighted this customer cohort as a possible risk, the revelation of a potential €300 million provision is obviously very disappointing.”

AIB is due to report its full-year results on March 6th.

1 If international visitors are pariahs should we not be testing them on arrival?
2 ‘My rent here is so low it’s a joke’
3 Can Grafton Street stop the flood of closures?
4 Belgium helps Ireland to a Brexit boon
5 Varadkar to meet banks in row over interest on mortgage payment breaks
6 WeWork on track for profits in 2021, says chairman
7 Banks will be judged less on payment breaks and more on next step
8 AIB to compensate another 1,100 tracker mortgage holders
9 Deposits grow at fastest rate since 2007 as households shore up finances
10 New Powerscourt Springs hotel to open in defiance of virus gloom
Real news has value SUBSCRIBE