Company seeking ‘greater allignment’ between business in Republic and UK 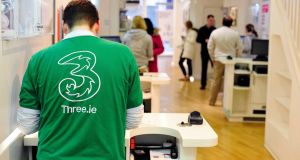 The decision mainly affects head-office staff in the UK and represents a roughly 7 per cent reduction to the company’s 4,300 workers, a spokeswoman for Three said in response to questions.

None of the company’s staff in the Republic will be affected by the announcement, a spokeswoman said, adding that no job cuts are planned here.

CK Hutchison, which gets about half its revenue from Europe, has seen its share price plunge by a third this year as the pandemic and political unrest in Hong Kong undermined its energy, retail, ports and real estate businesses. In August, chairman Victor Li said controls on costs would be “stringent but flexible” after profit fell 29 per cent in the first half and forecast declines for ports and retail in the second half.

While the conglomerate’s telecommunications businesses have been less vulnerable to the pandemic, CKH Group Telecom profit slumped 15 per cent in the first half, while active customers at European carriers under 3 Group Europe fell 7 per cent to 38.7 million.

CK Hutchison also said in August it had seen “meaningful improvements” in its UK telecom business from senior management changes.

Mr Finnegan took the reins of Three UK in March and continues to head up its sister wireless company in the Republic, which he has run since 2005.

In the UK, Three might have to look elsewhere for partners, since Telefonica struck a deal in May to combine UK carrier O2 with Liberty Global’s UK cable company Virgin Media.

The company is also discussing ways to align its businesses in the Republic and the UK, the spokeswoman said.

“As part of our ongoing transformation, we are consulting on changes to make our business the right size to serve our customers’ needs and drive greater alignment between the UK and Ireland, ” she said.

“We are seeking to minimize redundancies wherever possible through not back-filling vacancies and the removal of contractors’ roles,” she added. “We recognise this is an unsettling time and are fully supporting our staff through it.” – Bloomberg

1 In this strangest of recessions, what happens next for Ireland?
2 Chris Johns: Boohoo exposed on pay and conditions in digital economy
3 Hotel bookings collapse in wake of additional Covid restrictions
4 FBD changes wording of business insurance policies amid fight over virus payouts
5 Qatar Airways got €1.7bn government lifeline after losses widened
6 Bank of Ireland sees about 2,000 staff apply for voluntary redundancy
7 Workvivo to create 100 new jobs in Cork as business booms
8 Should I switch bank now with Ulster Bank at risk of closing?
9 ‘It’s a matter of fairness’: squeezing more tax from multinationals
10 EY Entrepreneur of the Year: nominee profiles
Real news has value SUBSCRIBE