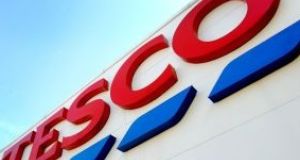 Analysts at Bernstein valued the Asian business at £6.5 billion to £7.2 billion.

Shares in Tesco jumped nearly 6 per cent in early trading at one point on Monday after Britain’s biggest retailer said it was considering a sale of its remaining Asian businesses, in Thailand and Malaysia, which analysts valued at up to $9 billion.

Tesco said on Sunday that it had begun a review of its Asian operations following “inbound interest” in the businesses that generate about 8 per cent of the supermarket retailer’s total annual revenue and 10 per cent of its profit.

Tesco said the review was at an early stage and gave no details of the approaches received.

Analysts at Bernstein valued the Asian business at £6.5 billion to £7.2 billion.

Tesco trades from 1,967 stores in Thailand and 74 in Malaysia. In the six months to August 24th the businesses together generated sales of £2.56 billion, up 1 per cent at constant exchange rates from a year earlier, and operating profit of £171 million, up 42.3 per cent.

Bernstein analyst Bruno Monteyne said Tesco’s Thai operation was a “high-quality business”, with 50 per cent of its earnings coming from a mall-rental business and 50 per cent from a food retail market that is much less competitive than the UK. He said the Thai business still had material organic growth opportunities.

At a capital markets day in June, Tesco said it was well placed to grow in Asia, particularly in Thailand, where it saw an opportunity for 750 new convenience stores over the “medium term”.

“That leaves the Thai business hugely undervalued as part of the group. That in itself provides ample justification to consider a disposal, especially if there is unsolicited interest,” he said.

Celebrating its 100th anniversary, Tesco is five years into a UK-focused recovery plan launched by chief executive Dave Lewis after an accounting scandal capped a dramatic downturn in trading. In October, Mr Lewis declared Tesco’s turnaround complete and said he would step down next summer.

He will be succeeded by Ken Murphy, a former executive at healthcare group Walgreens Boots Alliance, at a date yet to be confirmed.

In 2015 Tesco sold its South Korean arm to a group led by private-equity firm MBK Partners for $6.1 billion. A year later it sold its Kipa business in Turkey to Migros, the country’s largest supermarket chain.

Under its previous management Tesco made costly exits from Japan, the United States and China, starting a retreat from its once lofty global ambitions.

If Tesco does quit Thailand and Malaysia, it will inevitably raise questions over the future of its remaining overseas operations – its loss-making central European division, consisting of stores in Czech Republic, Hungary, Poland and Slovakia. – Reuters