Retailers accused of ‘stealing business’ from rivals by flouting restrictions 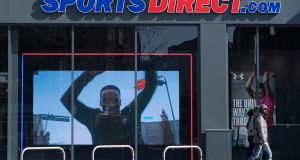 Sports Direct was among a list of brands criticised for keeping their outlets open despite a nationwide lockdown of all non-essential retail. Photograph: Joe Giddens/PA Wire

UK multiples Sports Direct, Office and DV8 were among a list of brands criticised for keeping their outlets open despite a nationwide lockdown of all non-essential retail. They were also accused of stocking up on certain Personal Protective Equipment (PPE), such as face coverings, solely to stay open.

Other smaller individual stores that fall into the essential retail category were also criticised for selling an expanded range of goods, outside their normal remit, in a bid to boost sales during the current restrictions.

Sports Direct said, however, its Irish stores were “only selling essential products” in keeping with the new Level 5 restrictions.

“All non-essential products have been moved to the back of the shop and/or are cordoned off from customers,” a spokeswoman said.

“We have a staff member placed at the door of our stores telling customers that we are only selling essential products and that any other products are available online for click and collect and or delivery,” she said.

Retail Excellence, which represents more than 2,000 retailers, said it had received complaints from members that some large retailers were abusing the current restrictions by selling non-essential items while being allowed to stay open to sell essential items.

Chief executive Duncan Graham said some retailers were not segregating the essential from the non-essential while others had brought in essential items to avoid having to close.

“We don’t think this is fair on the smaller retailers that have closed and are abiding by the rules,” he said.

There were also reports that some retailers were placing items deemed essential – such as food and face masks – among non-essential items.

Sam Smyth, owner of Urban Plant Life on Cork Street in Dublin, admitted his gardening store had expanded its range of pet foods since restrictions but insisted it was not operating outside the spirit of the rules.

He said there was no specialist pet food shops nearby “so we’re not competing with anyone and we’ve sold pet food in the past, now we’re just offering a bigger variety”.

Neil McDonnell, chief executive of the Irish Small Medium Enterprise association, insisted the problem was the lockdown itself.

“Retail closures are a disproportionate and misguided response to rising infection rates, and are seen as a retaliation against a soft target that isn’t responsible for the rise in case numbers,” he said.