Third quarter earnings of €144.5m as sales fell 6% but reversal in fortunes continues 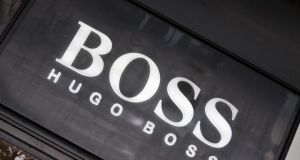 Hugo Boss,the German suit maker fashioning a turnaround under its new chief, reported third-quarter profit that topped analyst estimates on deeper-than-expected cost reductions and growth in China, pushing its shares further into a recovery since the summer.

Earnings before interest, taxes, depreciation and amortisation (eitda) and other items declined 14 per cent to €144.5 million ($159.9 million), the Metzingen-based company said in a statement on Wednesday, compared with the average analyst estimate of €138.5 million.

Chief executive Mark Langer, promoted from chief financial officer in May to replace Claus-Dietrich Lahrs, has closed failing stores in China and sacrificed sales at American department stores to ward off discounting.

He’s also replaced Boss’s US head and is pivoting from high-priced luxury to premium menswear such as €500 suits.

Sales in China increased on a like-for-like basis in the quarter, reversing the trend of previous periods, the company said, while US sales dropped 14 per cent.

“The third quarter has not been an easy one,” Mr Langer said. “However, we are on an upward trend in China now. I’m satisfied at how quickly and comprehensively we adjusted our cost structures.”

Shares of Boss rose 6.1 per cent to €60.12 at 9:15am in Frankfurt. After falling in the past two years, they’ve gained 13 per cent since the company reported better-than-expected second-quarter results in August.

Gross profit margin jumped 20 basis points to 64.7 per cent in the quarter, Boss said. For the year, the margin will be stable versus the previous year, it said.

The company’s expense reductions will total €65 million this year, €15 million more than planned.

Sales in Europe fell 2 per cent during the quarter, stung by France, the Benelux countries and Germany, where sales dropped 10 per cent.

Currency-adjusted sales in China were down 4 per cent, but stores open at least a year halted a series of quarterly declines.