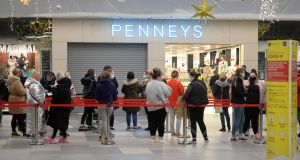 A queue as Penneys in Blanchardstown, Dublin, when it opened its doors on December 1st. Photograph: Dara Mac Dónaill 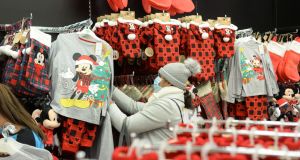 Penneys stores in Ireland broke their daily sales records on two days running after the reopening this week of non-essential retail outlets.

John Bason, finance chief at the stores’ parent company Associated British Foods (ABF), made the announcement as the group raised its estimate of lost sales due to Covid-19 lockdowns this autumn to £430 million (€478m).

However, he said it was hopeful of of making up some of the shortfall with “phenomenal” pre-Christmas trading.

“It’s very clear that our trading before the lockdown and now our trading these first few days after lockdown [is] way higher than we had previously expected,” he said. ““I think we’ll have a strong run up to Christmas. So I think it will erode that number when we finally come to report it.”

The group, which had previously forecast a £375 million sales hit from forced store closures, said on Friday it still expected fashion chain Primark’s full-year 2020/21 sales and profit to be higher than the previous year’s.

Primark, which trades in Ireland as Penneys but does not have an online offer, made a profit of £362 million in its 2019/20 financial year which ended on September 12th.

Mr Bason said trading at stores in its major markets of Ireland, England, France and Belgium which reopened in the last week has been “phenomenal”.

Shares in the group, majority owned by the family of chief executive George Weston, were up 2.65 per cent in late afternoon trading in London, paring 2020 losses to 9.1 per cent.

Across its markets 34 stores remain temporarily closed, including all stores in Northern Ireland and Austria, representing 7 per cent of its total selling space.

ABF said all orders Primark has placed with suppliers have been honoured.

The group said it has completed all practical preparations for the end of the Brexit transition period on December 31st, and contingency plans were in place should its businesses experience disruption. – Reuters