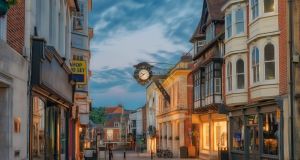 The UK high street has been one of the worst-hit sectors of the economy there, with the situation mirrored in the Republic. Photograph: iStock

The chief executive of Next, one of the UK’s most successful retailers, has said the shift to online shopping triggered by the lockdown means there is no future for thousands of traditional retail jobs.

The UK high street has been one of the worst-hit sectors of the economy with nearly 125,000 jobs lost in there in the first eight months of this year as retailers closed stores and in some cases went into administration. The closures have been mirrored in the Republic, where Next also operates an extensive network.

Simon Wolfson said what looked to be a permanent shift to online spending was creating work for warehouse staff and couriers but that in the long run fewer people were going to be needed in shops, and their jobs would be “unviable”.

“I wouldn’t want to underestimate the difficulty that is going to cause a lot of people who work in retail,” he said. “ I think it’s going to be very uncomfortable.”

Marks & Spencer, Debenhams and John Lewis are among the UK household names to have announced major job cuts as a result of the pandemic.

Still, Next has emerged from the crisis as one of the UK high street’s most resilient brands. Last week it raised its profit guidance for a second time as the company’s sales recovered from the shock of the lockdown when its stores were closed for several months. – Guardian service