Nestlé to pay $7bn to add Starbucks’ products to its portfolio

Deal is latest move in Nestlé’s US strategy 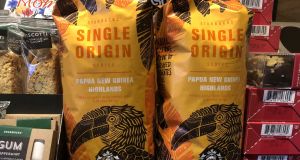 Starbucks coffee is to be sold by Nestlé. 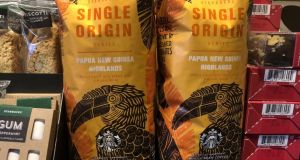 A Nestlé executive said the Starbucks deal would “allow us to address a historical weakness Nestlé had in North America”. Photograph: Mike Segar/Reuters

Nestlé has agreed a $7.15 billion deal with Starbucks to sell its coffee products outside the US brand’s cafe chain as the Swiss group ramps up its US and global expansion plans.

The world’s largest food and drinks group will add Starbucks’ brand to its Nescafé and Nespresso portfolio, it announced on Monday, and will roll out their sale across markets worldwide – especially in Asia.

The deal is the latest move by Mark Schneider, who took over last year as chief executive, to boost Nestlé’s sales growth and profits. Like other big consumer goods groups, Nestlé has lost sales to smaller rivals as a result of changing consumer tastes and slow economic growth.

Mr Schneider has identified coffee as a fast-growth market for the Swiss group. However, it is weak in the US coffee market, where it faces stiff competition from the empire built by JAB Holdings, the investment company of Germany’s billionaire Reimann family, which includes Keurig Green Mountain capsules.

The deal “opens up another front against JAB”, said Jon Cox, consumer industry analyst at Kepler Cheuvreux in Zurich. “It gives Nestlé a better position in North America, and also in roast and ground [coffee] where they don’t have any position on a global basis . . . The magic will be really using Nestlé’s global distribution and modern retailing to really leverage sales of Starbucks products.”

The $7.15 billion (€6 billion)up-front cash payment was equivalent to 15 times earnings before interest, tax, depreciation and amortisation – in line with other deals in the sector, analysts said. Nestlé’s share price, which has fallen 4 per cent over the past 12 months, was up 1.7 per cent at SFr77.46 (€66.45) by afternoon trading in Switzerland.

Starbucks’ “out-of-shop” operations – which include ground coffee, coffee beans and capsules for coffee machines for sale beyond its cafe chain – generate $2 billion in annual revenues.

Starbucks said the proceeds from Monday’s deal would be used to accelerate share buy-backs and that it expected to have returned $20 billion to shareholders in cash by the end of its 2020 fiscal year.

A Nestlé executive said the Starbucks deal “will allow us to address a historical weakness Nestlé had in North America”. It will buttress Nestlé’s efforts to expand its Nespresso upmarket coffee capsule system in the US, following the 2014 introduction of VertuoLine machines producing the long coffees preferred by Americans.

The Swiss group has also revamped its Nescafé Gold Blend instant coffee brand and last September acquired a majority stake in the hipster Blue Bottle café and roastery chain, which valued the Californian company at more than $700 million. Nestlé is considering using the Blue Bottle brand to expand ready-to-drink products, which are excluded from the Starbucks deal.

Under their partnership deal, which does not involve the transfer of any industrial assets, Nestlé will work with Starbucks on developing new coffee products – although the US group will retain control over its global brand management. Nestlé would pay royalties for the Starbucks brand at normal market rates, it said.

The deal means Starbucks coffee capsules will in future be available for Nestlé coffee machines. However, Nestlé also hopes to use its global distribution and manufacturing facilities to sell Starbucks products in geographical markets underserved by the US group. That would include selling soluble Starbucks coffee in developing-market economies, where instant coffee remains popular.

“This transaction is a significant step for our coffee business, Nestlé’s largest high-growth category,” said Mr Schneider. “With Starbucks, Nescafé and Nespresso we bring together three iconic brands in the world of coffee.”

Kevin Johnson, president and chief executive of Starbucks, said: “This global coffee alliance will bring the Starbucks experience to the homes of millions more around the world through the reach and reputation of Nestlé.”

About 500 Starbucks employees will move to Nestlé. Operations will continue to be located in Seattle. – Copyright The Financial Times Limited 2018

1 Hugo MacNeill steps back from Goldman Sachs role
2 Should AIB compensate me for upsetting letter on arrears?
3 Irish company paid €1.2m a year by collapsed Blumenthal-linked Australian restaurant
4 Why bosses should not be afraid of speaking out on Instagram
5 Tax shifts won’t drive multinationals out of Ireland - Moody’s
6 ‘I wouldn’t be a big saver. I tend to buy now and repent at leisure!’
7 High time: Netherlands moves to clean up absurd cannabis policy
8 Artomatix buyer revealed as Unity Technologies
9 Fitzwilliam Card Club casino in Dublin closes with loss of 80 jobs
10 Poll on second election, concerns over Irish pension gap, and Ireland’s rich list
Real news has value SUBSCRIBE