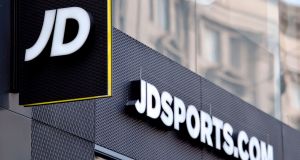 The company operated 18 stores during last year and numbers employed by the business increased from 631 to 667.

Pretax profits at the main Irish unit of JD Sports last year increased by 2 per cent to €12.9 million.

New accounts show that John David Sports Fashion (Ireland) Ltd enjoyed the growth in profits after revenues increased by 13.6 per cent to €108 million from €95.26 million in the 12 months to the end of February 2nd last.

The company operated 18 stores during last year and numbers employed by the business increased to 667 from 631.

According to the directors, the company continues to look at all opportunities in the current offer driven market to improve market share and protect margin while exercising strong cost controls.

The directors say they will continue to utilise its store portfolio to improve market share.

The profit at the company takes account of non-cash depreciation costs of €1.15 million, while leasing costs increased to €7.9 million from €7.34 million.

Separate accounts for a connected JD Sports company, Champion Sports Ireland Unlimited show that pre-tax profits increased by 13 per cent to €2.3 million as revenues reduced to €9.2 million from €13.9 million in the 12 months to the end of February 2nd last.

The company operates two stores here and the directors state the company will continue with the conversion programme to convert the remaining Champion Sports stores to the JD fascia.

The directors state that “once a store has converted into the JD fascia it will transfer into John David Sports Fashion Ltd”.

Numbers employed at the Champion Sports company reduced to 74 from 100, with staff costs decreasing to €1 million from €1.68 million. The company’s operating lease rentals totalled €734,000.