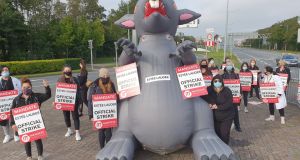 A trade union representing staff at an Estée Lauder concession at Dublin Airport has served notice of three further strike days in an effort to “prevent compulsory redundancies”.

Robert McNamara, a divisional organiser for trade union Mandate, said an additional three strike days are planned, two of which are next week.

About 40 Estée Lauder workers at Dublin Airport went on strike for a second day on Friday. They are seeking to be offered voluntary, rather than compulsory, redundancy as well as a negotiation on redundancy terms.

Mr McNamara said that the average length of service for the staff at the beauty company concession is 15 years. He said workers at the concession were told about two months ago that staff numbers would have to be cut in response to the Covid-19 pandemic, while those who remained would see a reduction in hours and pay rates.

An Estée Lauder spokeswoman said that, like many other business, the company is adapting to the challenge of Covid-19, “which has accelerated existing shifts in the travel retail landscape and given rise to others”.

“As part of that process, and following a consultation process, we have had to take the difficult decision to make some of our employees redundant.

“The Estée Lauder Companies have engaged openly and transparently with our colleagues and their union throughout this period. As part of this engagement, we have made a number of concessions, including going beyond the legal requirements and providing redundancy payments to those colleagues who are not eligible for statutory redundancy and recalibrating existing roles to minimise the number of redundancies to be made,” she said.

But Mandate disputes the suggestion of consultation, claiming that “all it would take to prevent this strike is for the company to sit down and negotiate with the workers through their trade union”.

“We’ve been left with no alternative but to refer this dispute to the Labour Court and ask for an urgent hearing,” Mr McNamara said. He said that in total about 50 people are employed by the company, of whom 44 are members of Mandate. Some staff have already been made redundant, he said.

Estée Lauder is one of a number of brands controlled by the Estée Lauder Companies, an American multinational listed on the New York stock exchange.

Announcing its results for the year, the company also told investors about its business acceleration programme, whereby it plans to reduce its retail footprint, “primarily in Europe, the Middle East and Africa and in North America”. As a result of that plan, the company said it expects to reduce the number of point of sale staff and support staff it employs by between 1,500 and 2,000, about 3 per cent of its current workforce including temporary and part-time employees.

1 Hurrah for the companies giving staff more time off
2 RTÉ to seek 70 voluntary redundancies as ‘large costs’ beckon in 2021
3 Covid-19 will worsen shortage of accountants, says CPA Ireland
4 Some Irish money market funds came close to danger in March
5 Sustainable investment: How your pension can help tackle climate change
6 Start-up Loanitt raises €570,000 as it looks to double headcount
7 ‘We lost money on our planned wedding in Spain. Covid saw to that’
8 Policy failed us during the banking crisis and it’s failing us again
9 How to make the hybrid workforce model work
10 How long can Government afford to keep State pension age at 66?
Real news has value SUBSCRIBE