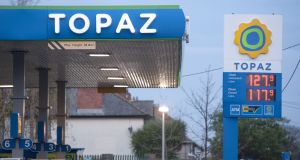 The company behind the Topaz fuel and convenience store chain is suing a Dublin-registered company for €4.7m over alleged failure to complete a share purchase agreement. Photograph: Dave Meehan

Denis O’Brien and Alimentation Couche Tard, the Canadian company to which he sold the Topaz network of filling stations last year, have become embroiled in a row over the terms of payment for a portion of the consideration.

Mr O’Brien’s Kendrick Investments, the Isle of Man entity that held his stake in Topaz Energy Group Ltd (TEGL), is suing Circle K Holdings, an Irish company linked to Couche Tard, for €4.7 million it claims it is still owed.

Mr O’Brien, along with minority shareholders including his nephew and former Topaz chief executive Emmet O’Neill, sold Topaz to the Canadian company for about €258 million in cash plus debt, in an overall deal valued at more than €400 million.

Circle K has hired top Dublin corporate law firm, Eversheds, to represent it in the case. Kendrick, which is represented by LK Shields, is seeking summary judgment at the High Court for a slice of this amount it claims it is still owed.

Mr O’Neill, on behalf of the former owners of Topaz, was unavailable for comment last night.

The overall deal, which included a network of 444 filling stations, convenience stores and a network of fuel depots, officially closed on February 1st, 2016, according to stock market filings by Couche Tard.

The dispute between Mr O’Brien and Circle K emerged on Monday in a short court hearing. The case has been put back until December, unless the matter is settled before then.

In the hearing, Kendrick said Circle K Holding Ireland made a €1.8 million payment as part of an overall €7million share purchase agreement but failed to pay the balance of €4.7million.

In an affidavit, Kendrick director Dermot Hayes said, under a December 2015 agreement involving his firm and certain convenantors, Kendrick agreed to sell its shares in TEGL to 9121-2738 Quebec Inc.

Under an assignment of rights (deed of novation) mechanism, it was agreed Circle K Ireland would assume the share purchase agreement, he said.

Mr Hayes said the share purchase agreement provided the defendant would pay Kendrick €7 million under what was called the “Dublin Port Additional Consideration”.

This related to a February 2016 lease for certain premises at Dublin Port and a retail lease which was not to be terminated before August 2017.

The Dublin Port consideration was satisfied and the €7million became payable, less an agreed €480,000 related to working capital, he said.

While Circle K Holding Ireland had paid some €1.8 million in September 2013, the remaining €4.7 million was still owing, he said.

The defendant company has raised a “wholly unmeritorious” breach of warranty claim, it is alleged.