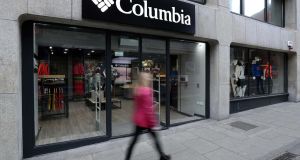 Columbia Sportswear: 120sq m shop on Trinity Street will open as a partnership with Irish-owned retailer Great Outdoors which will run the business.

Columbia Sportswear, a Nasdaq-listed manufacturer of outdoor clothing, will open its first Irish standalone retail outlet on Saturday, as it brushes off the threat of the coronavirus pandemic by declaring it has “faced bigger challenges in our 82 years of business, and we persevered”.

The 120sq m shop on Trinity Street in Dublin city centre will open as a partnership with Irish-owned retailer Great Outdoors which will run the business. Despite the widespread collapse in retail sales due to the pandemic, the new Columbia store aims to capitalise on a post-virus consumer desire to engage in more outdoor activities.

Columbia’s Oregeon-based president and chief executive, Tim Boyle, whose family still owns a majority share, said its first Irish store opening was three years in the making since it first struck a deal with Great Outdoors directors Derek Moody and Ken Costigan. Columbia was previously only a supplier to Great Outdoors.

“When your last name is Boyle, you had better have a presence in Ireland,” said the billionaire businessman, who is also well-known in the US an arch critic of its president, Donald Trump. Mr Boyle’s Irish roots include his grandfather, whom he says immigrated illegally to the US in the last century.

Although Columbia has invested heavily in e-commerce sales in recent years, Mr Boyle argued it is still important for brands to maintain a physical retail presence. The company, which has annual sales of more than $2.9 billion (€2.6 billion), has a European network of 36 stores. Most of its products, including jackets and Sorel boots, are sold by third-party retailers. Mr Boyle joked that Ireland’s rainy weather should boost sales of its brand, which vies with its rival North Face for outdoor apparel customers.

“Having a standalone store for the brand gives customers the opportunity to touch and feel the merchandise. You don’t get that with online,” said Mr Boyle. The 71-year-old businessman said, however, that he had become a member of “The AA – analogues anonymous. We’ve gotten more used to online sales and they are now a big part of our business.”

He said the pandemic affected some of Columbia’s Asian supply chain, but the company entered the crisis with $750 million in cash on its balance sheet and no bank debt, “so we’re in better shape than our competitors”. On the retail side, Columbia began reopening its locked-down US stores in mid-May.

Mr Boyle said a hard Brexit later this year could complicate its UK operations, as its European distribution hub is in France. It would not affect its Irish operations, however.

The outspoken critic of the US president said the Trump administration is “insane . . . and just terribly wrong” in its approach to several issues such as trade and immigration. He believes the US president may be beaten in the upcoming election.

“Trump, with the help of other countries, appealed to the basest part of the US population. They were easily swayed by a conman, which Trump is. He focuses on topics that are red meat to them. Hopefully it will be all over in January.”

The new Dublin Columbia store opens on US Independence Day, after three years and 20 separate property viewings by the Great Outdoors team. It will include a “history wall” from the Boyle family’s archives, as the family-controlled company tries to highlight its Irish links with the new venture. The Great Outdoors directors said Mr Boyle had made them “part of the family”.