Ciarán Hancock: Any reprieve on hospitality VAT should be short-lived 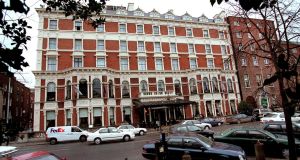 It’s budget time, which means the 9 per cent VAT rate enjoyed by the hospitality sector is once again up for debate.

Previously, the view was that this “temporary” rate – introduced in 2011 when Taoiseach Leo Varadkar was the minister for tourism – was safe for another year at least.

The programme for government agreed last year by Fine Gael and the Independent Alliance includes the “retention of the hugely successful 9 per cent VAT rate on tourism related services, providing that prices remain competitive”.

The last five words of that sentence might be Paschal Donohoe’s get-out-of-jail card as he frames his first budget as Minister for Finance.

The annual Crowe Horwath hotel survey, published in August, showed that the average room rate in Dublin hit an all-time high of €128 in 2016. The previous record was €121, set in 2006.

Nationally, including Dublin, the average rate was €104. And as many tourists, or those trying to book a room for a wedding or family occasion, will tell you, the rates being charged on many nights of the year are actually much higher.

This has led to a growing sense, even within the hospitality sector, that some form of hike might be included in next month’s budget. Especially as Donohoe seeks some revenue-raising measures to increase his headroom for tax cuts and capital spending. Currently only a skinny €300 million is available.

In July, the Tax Strategy Group noted the Revenue’s estimate that a return to the 13.5 per cent rate would yield €491 million in additional exchequer income per annum.

Two options for tax increases have been mooted to date. One is that the rate would rise by one percentage point to 10 per cent, raising about €150 million a year.

The other is that some form of city bedroom tax would be imposed on hotels, as applies in New York and many continental European cities.

This would have the benefit of capturing some of the inflated profits that Dublin hotels must be making at the minute given the demand-supply imbalance and the saucy room rates being charged. And it wouldn’t hit accommodation providers in rural areas, who are deemed to be most at risk from a tax hike.

New hotel openings by Dalata in the Republic next year will create 550 new jobs, some of which McCann says could be placed at risk if the Government tinkers will the tax rates.

At some point on Wednesday, the Restaurant Association of Ireland will publish a report on the potential impact of a one percentage point increase on the hospitality sector, authored by economist Jim Power.

“It is inevitable that a 1 per cent increase would cost jobs in the sector. The only question is how many jobs would be lost,” it states. “It is not beyond the bounds of possibility that up to 4 per cent of the jobs in the sector could be shed, which would equate to around 6,000 jobs, both part-time and full-time. Rural areas would be particularly vulnerable.”

The report says that the reduction in the VAT rate “enabled prices to be reduced for hard-pressed consumers”.

The reality is that is that the rate cut helped to repair profit margins rather than reduce prices, which is fine given where the economy was at in 2011. And it helped to boost employment in the sector by 37,800.

There was no great science behind the report’s findings but there’s no doubt that some operators around the State would be hit hard by an increase in VAT. There is anecdotal evidence to suggest that wedding bookings in Border areas are weak as couples take advantage of sterling’s Brexit-related weakness to get deals in the North.

Donohoe might well leave the 9 per cent VAT rate alone this year due to the politics involved in getting his first budget across the line. Fianna Fáil doesn’t seem to favour an increase.

But it should be only a temporary reprieve. After all, if the industry was as precariously positioned as we are led to believe, why then would various smart investors (including Dalata) be planning to add 5,000 new hotel bedrooms in Dublin alone by 2020?