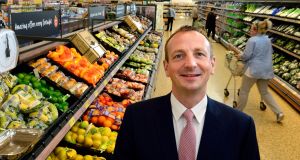 Giles Hurley, head of Aldi Ireland, is particularly excited by Aldi’s chilled fish section. Sales of the scaly stuff are almost two and a half times what they were two years ago. Photograph: Cyril Byrne

Sallynoggin, the blue-collar south Dublin suburb, isn’t overloaded with claims to fame. But it has its charms: an Aslan gig at the Noggin Inn, for example, should be compulsory for all Irish citizens at least once in their lifetime – a sort of National Noggin Hajj.

The area is an unlikely setting, however, as the springboard for a fresh-foods assault on the grocery market with wholesome weapons such as spirulina (a wholefood algae), manuka honey and lactose-free milk. Maybe it really is a Crazy World after all.

Aldi, the German discounter with 11.4 per cent of the Irish market, is stepping up its drive away from the perceptions of its austere past to further ride the wave of fresh food hipsterism that has caught the imagination of Irish shoppers.

Its Sallynoggin store is the prototype for Project Fresh, a new retail approach it plans to roll out across its entire Irish estate of 129 outlets.

Aldi and its counterpart Lidl’s homegrown rivals, Dunnes Stores and SuperValu, have stalled the German competitors’ market share march over the last year or so. Can a fresh approach help Aldi gain the initiative?

Aldi’s managing director for Ireland and Britain is Giles Hurley, a Harrow and Trinity educated Anglo-Irishman. Like spirulina or turkey rashers, one might imagine he is a novelty around Sallynoggin. But he was on hand there this week to show me around.

Hurley’s thesis is simple: the scales have fallen from Irish shoppers’ eyes after the recession, and they’ll demand low prices, Aldi’s traditional turf, forever more. But now they also demand information on the provenance of their food. Where is it made and what does it contain? How much salt or sugar is added?

“And when they’re not eating healthily, they feel confident enough to indulge,” says Hurley. He demonstrates the consumer shift by picking up a bottle of fresh lassi from Donegal. When Aldi first arrived in Ireland 17 years ago, a Donegal lassi was a sheepdog from Gweedore, not a yoghurt drink inspired by an Indian recipe.

Under Project Fresh, Aldi is expanding its chiller space by 40 per cent, allowing it to broaden its range of fresh fruit and vegetables. Its greens are now in wider aisles, located right at the very front of the store. When Aldi first launched in Ireland, Hurley says, it sold 15 fresh food product lines, with no garlic. Now, inside the front door of Sallynoggin, you can choose from what seems like a half-acre of fresh berries.

Down the aisles, beyond the ready-to-go pouches of quinoa and the bang of fresh basil in the air, Hurley is particularly excited by Aldi’s chilled fish section. Sales of the scaly stuff are almost 2½ times what they were two years ago. Over the same period, it has also invested heavily in fresh meat.

Hurley is at pains to highlight that 50 per cent of its range is Irish, much of it certified by Bord Bia. Aldi now sell organic salmon and steak, and Johnny Lynch’s buffalo mozzarella from Macroom, where once it was infamous for selling (British) Irish stew in a tin alongside products from beyond the old iron curtain with names nobody could pronounce.

In this beard-stroking, plaid shirt-wearing, granny jumper-knitting age, Aldi is also investing heavily in its craft beer ranges. Its alcohol aisles in general are getting a bit of a makeover. Less Galahad Export piled floor to ceiling, and more wooden crates, craft gins and myriad bottles of IPA.

Even the signage hanging from the ceiling has been banished to give stores a cleaner, less cluttered look.

The challenge for Aldi, however, as it pushes into fresher territory is maintaining the integrity of its very detailed, and very German, operating model. Its success, and the ability to offer low prices, is built on a foundation of standardising procedures, logistical planning and operational simplicity.

That’s a lot easier to achieve when you have 800 product lines, as it had a decade ago, instead of the 1,700 lines it has now. Hurley also reveals it is trialing in-store bakeries at its outlets in Wilton and Newlands Cross: “The jury is still out.”

As Aldi becomes a more complicated business – straddling the canyon between discount and indulgence, functional and fresh – it moves further and further towards the ground where its larger competitors are more at home.

The German discounters’ greatest achievement since entering the Irish market has been in dragging the bigger incumbents onto its value turf, forcing the likes Dunnes and Tesco into a price war that Aldi (and its counterpart Lidl) were built to win.

Now it is playing a different game with different rules. Let’s see if it can keep up its forward march.

– While we’re talking about Aldi, the group has worked with dairy supplier Strathroy ever since it entered the Irish market.

I was struck – thankfully only in the figurative sense – by the sight of a Strathroy truck this week as it trundled through Dublin. “Strathroy: Ireland’s National Dairy Company” was emblazoned across its side.

Our “national” dairy? Did somebody give the Socialist Party the keys to the Department of Agriculture while nobody was looking, and they sneaked in and nationalised the thing?

No, Strathroy is still owned by the Cunningham family from Omagh, who have been dairy processors for generations. The business now collects and processes milk from farmers on both sides of the Border, which is presumably the basis for the “national” moniker. But it seems a bit of a stretch.

Strathroy isn’t “Ireland’s national dairy company”. It’s a private sector, northern dairy business that has started operating on both sides of the Border. It isn’t even the only one of those – LacPatrick has facilities in Derry, Tyrone and Monaghan.

Let us maintain at least some of the original meaning of the word when we start designating companies “national”.

Meanwhile, as the Strathroy truck passed me by this week, I noticed another cheeky slogan emblazoned across the back: “Legendairy.” Indeed.

– The tax defaulters list this week was a veritable cornucopia of fiscal flubbers. Among the myriad professions and activities of the people and businesses who were listed as defaulters, we had public relations agents, royal aides, barristers, builders and publicans.

But my personal favourite was the family-owned business from Wexford which was listed as a defaulter to the tune of almost €150,000. Its founder’s profession? A “car boot sale facilitator”.