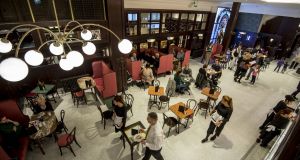 Irish coffee group Bewley’s returned to profit last year despite recording a loss of about €1.5 million at its flagship cafe in Grafton Street, Dublin.

Latest accounts for Bewley’s Ltd show it made a profit of €389,000 last year compared with a loss of €18.6 million in 2017, which was largely due to Brexit-related expenses and costs associated with the lease of its Grafton Street cafe.

Group turnover fell by 2 per cent to €147.6 million while its cost of sales declined to €74.2 million from €76.6 million previously. Other operating costs were flat at €71.9 million.

The company, which has operations in Ireland, the United States and Britain, posted an operating profit of €1.4 million, down from €2.2 million a year earlier.

Speaking to The Irish Times, chief executive John Cahill said the losses at its Grafton Street cafe were due to its near €1.5 million rent, which he described as “excessive” and a legacy from the Celtic Tiger boom.

Bewley’s fought a long-running legal battle with its landlord, Johnny Ronan’s Ickendel Ltd, post the crash in 2008 to get the rent reduced to a market rate but was ultimately unsuccessful. Its lease is due for renewal in 2022.

“Our core mission here is to make this cafe financially viable against the benchmark of a fair, open market rent. And what we’re paying at the moment is a two or three times multiple of what it should be,” he said.

Mr Cahill said the cafe had also been impacted by the VAT increase from 9 to 13.5 per cent, and football on Grafton “easing off a little back due in part to the effect of the [cross-city] Luas”.

Some 600,000 customers passed through the Bewley’s cafe on Grafton Street in 2018, its first full year of trading following a major refurbishment of the listed property.

Mr Cahill said coffee volumes rose last year by 3 to 4 per cent while its gross margin – a key metric for the business – was up 0.5 per cent.

In terms of sustainability, Mr Cahill said Bewley’s was working on a new “compostible, recyclable packaging foil, which is the next challenging area for everybody to look at”.

Bewley’s increased its stock levels in 2018 by just under €1 million, which reflected some stockpiling of products in the UK due to Brexit.