Grandson of founder accuses mother and sisters of defrauding company 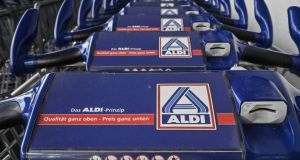 An heir to the Aldi dynasty has declared war on his own family, accusing his mother and siblings of defrauding the company.

The legal action by a Nicolay Albrecht, a grandson of Aldi founder Theo Albrecht, marks the latest twist in a long-running feud inside the billionaire family that once prized itself for keeping an obsessively low profile.

In his formal legal complaint, Nicolay Albrecht accuses his mother, Babette, his two sisters and their lawyer of enriching themselves at the company’s expense and contrary to two legal rulings from 2017 and 2019.

In addition, he says he has been excluded from the latest of these payouts, said to be worth about €30 million annually.

State prosecutors in the northern city of Kiel have confirmed they have received the complaint, filed personally by Mr Albrecht, which they are now studying.

The Aldi empire has stores in 20 countries, 220,000 employees and combined turnover of about €81 billion. It began life in 1945 when Theo Albrecht and his brother Karl took over the family grocery shop in the western city of Essen. Three years later they launched their discount principle of limited stock and low prices and expanded across Germany.

In 1961 the brothers divided their company in two: Karl took Germany’s southern half, and Aldi Süd is the retailer operating in Ireland. Theo’s Aldi Nord is the company at the centre of the family row which began with the death of Berthold Albrecht, son of founder Theo, at just 58 in 2012.

A key figure in the battle is Berthold’s widow Babette, who has refused to adapt to Albrecht family ways of shying away from the limelight and avoiding scandal. In the past decade she has been a regular sight in spectacular court cases involving art swindlers and, most recently, her own brother-in-law.

Since the death of his founding father and uncle in 2010 and 2014 respectively, Theo Albrecht jnr has become the patriarch of the Aldi Nord empire.

For most of that time he has been locked in legal battle with Babette and her children, who refuse to accept Berthold Albrecht’s will.

Sensing the potential for a major family feud, Berthold Albrecht changed his last wishes shortly before his death. The new will stated that there should be no majority of family members in the main foundation that decides on investment and strategy at Aldi Nord.

As heirs, his widow and children lost their legal challenge against the will in the final instance last year. Germany’s highest administrative court insisted the will was valid, but Berthold’s heirs have yet to hand back their seats on the board of one controlling foundation.

Since 2014 those seats have yielded at least €25 million annually, paid in part by Theo Albrecht on condition Babette and her children stay out of business decisions.

Nicolay Albrecht alleges his mother and daughters defrauded the company last year for paying themselves €30 million on the basis of board seats to which they have no legal claim.

He has fallen out with his mother because, for the first time last year, he was no longer part of the multimillion payout. Last September he appeared at his mother’s home in Essen accompanied by two unidentified men.

She called the police, the media got wind of it, and the row has since escalated.

Legal experts suggest Nicolay Albrecht’s complaint has only a modest chance of success. But it has hardened speculation that the privately-owned Aldi, one of the world’s largest retailers, may yet fall victim to the age-old curse of business: the first generation builds up, the second manages, the third destroys.

Either way the feud increases pressure on the Albrecht family to reform Aldi Nord’s tax-efficient holding structure, based on four foundations. The foundation at the heart of the feud can only agree far-reaching investment and strategy on the basis of unanimous decisions – unlikely given the family stand-off at present.

Further stalemate could prove awkward for the wider Aldi empire. Though Aldi Süd is a separate legal entity, it has been increasing co-operation with its sister company in recent months, from product range to recruitment.

Earlier this month a new study showed that, for the first time in living memory, Aldi has lost its crown as Germany’s most popular supermarket to the co-operative retailer Edeka.